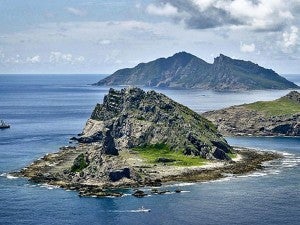 The Senkaku islands, known as Diaoyu in China. AP Photo

TOKYO—Japan is planning to launch satellites to monitor the world’s oceans, a report said Sunday, as Chinese government ships plied waters around islands controlled by Tokyo and claimed by Beijing.

The Cabinet office plans to launch nine satellites in the next five years to counter piracy and monitor the movements of foreign ships intruding into Japanese territorial waters, the business daily Nikkei reported.

They will also collect data for forecasting natural disasters such as tsunamis, it said.

The report, which cabinet ministry officials could not immediately confirm, came as Japan’s coastguard said three Chinese government ships entered waters around the Senkaku islands in the East China Sea.

The maritime surveillance vessels entered the 12-nautical-mile zone of Uotsurijima, one of the Senkaku islands, which China calls the Diaoyus, at about 9:30 am (0030 GMT), the coastguard said.

Ships from the two countries have for months traded warnings over intrusions into what both regard as their territory as Beijing and Tokyo jostle over ownership of the strategically sited and resource-rich islands.

The territorial row that dates back four decades reignited last September when Tokyo nationalised three islands in the chain, in what it said was a mere administrative change of ownership.

Former Japanese prime minister Yukio Hatoyama came under fire in June after he said he understood China’s claim to the islands.