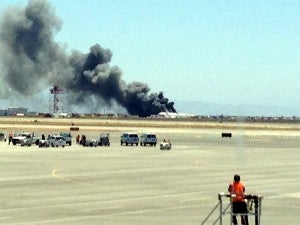 This photo provided by Krista Seiden shows smoke rising from what a federal aviation official says was an Asiana Airlines flight crashing while landing at San Francisco airport on Saturday, July 6, 2013. AP

The passenger plane crashed while landing, said the report. A billow of smoke was seen on the runway of the airport, as shown by the TV live feed at around 3 a.m. Sunday.

The CCN breaking news report said the plane, identified as Asiana Airlines Flight 214, came from Seoul. Terrorism was ruled out by a National Security official, the report added.

Quoting hospital spokeswoman Rachael Kagan, AP reported the adult patients’ age rane from 20 to their 40s. It was not immediately clear the ages of the children.

However, CNN said among the 10 injured, six were females and four were males.

But when AP contacted the local police, fire and coroner’s officials, they were unable to confirm any deaths.

Ciria Cruz of INQUIRER.net US Bureau earlier reported a passenger, David Eun had tweeted, “I just crash landed at SFO. Tail ripped off. Most everyone seems fine. I’m ok. Surreal… (at ‪@flySFO)

As of 6:30 a.m. (Manila time), CNN said a press conference will be held soon at the airport.