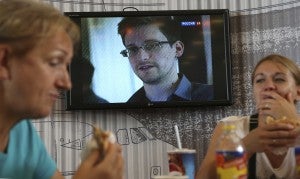 In this June 26, 2013, file photo transit passengers eat at a cafe with a TV screen with a news program showing a report on Edward Snowden, in the background, at Sheremetyevo airport in Moscow, Russia. Italy and France rejected on Thursday, July 4, 2013, the requests for asylum from fugitive US intelligence leaker Edward Snowden. AP PHOTO/SERGEI GRITS

Italy and France both rejected on Thursday the requests for asylum from fugitive US intelligence leaker Edward Snowden.

Italian Foreign Minister Emma Bonino said Thursday that Italy could not accept an asylum request from the former US intelligence analyst because there were no legal or political conditions to do so.

“The request for political asylum was lodged two days ago via a fax sent to the Italian embassy,” Bonino said in an address to parliament.

“The rules require that the asylum-seeker needs to present himself personally” either to the embassy or on Italian territory, she said.

“The conditions are not there to accept it, nor is it possible for the Italian government from a political point of view,” she said.

France also said on Thursday it was rejecting Snowden’s request for asylum.

“Like many countries, France received a request for asylum from Mr. Edward Snowden through its embassy in Moscow. Given the legal analysis and the situation of the interested party, France will not agree,” the interior ministry said in a statement.

Interior Minister Manuel Valls had earlier Thursday said France had not yet received a request for asylum from Snowden, but that he was personally opposed to granting it.

“This request, if it is made, poses a number of legal problems. As far as I’m concerned, I’m not in favor,” Valls told BFMTV, adding: “The United States is a democratic country, with an independent judicial system.”

Snowden has been holed up in a Moscow airport transit area since June 23, seeking to avoid US espionage charges for revealing a vast surveillance program to collect phone and Internet data. He has requested asylum in 21 countries.