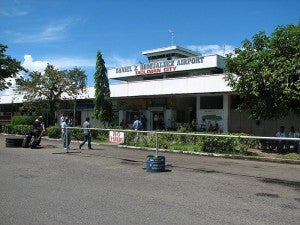 TACLOBAN CITY—Passengers are protesting the more than 100-percent increase in terminal fee at the biggest airport in Eastern Visayas.

Aside from the lack of prior announcement, the passengers are complaining that there is barely any improvement in the Daniel Z. Romualdez (DZR) Airport here that would justify a fee increase.

The Civil Aviation Authority of the Philippines (CAAP) has increased terminal fee at the DZR from P30 to P75, an adjustment of more than 100 percent.

The reason for the increase was not stated in a notice that was issued by the CAAP in Manila last July 1, which coincided with the heavy traffic of passengers who attended the Tacloban City fiesta on June 30.

But during a public consultation in September last year, Antonio Alfonso, CAAP area manager, said it was time for the terminal fee to increase since the last increase was in 1997 yet, which brought the rate to P30.

Businessman Go Tic Cheng, however, said he was surprised by the increase because the local CAAP didn’t issue any prior notice about the terminal fee increase.

Cheng said that he only learned about the new rate on July 1 when he accompanied his daughter who was leaving for Manila.

“The increase is sudden. There was no public hearing or notice about it,” said Cheng, head of the Tacloban Filipino-Chinese Chamber of Commerce and Industry (TFCCCI).

He said that the CAAP should have first conducted an information campaign before it imposed the new rate.

Besides, he added that the P75 fee is not justifiable given the present condition of the airport.

“The people will not oppose any increase if they will improve the terminal building. But at this time, to me, the increase is not justifiable,” Cheng said.

Passenger Leslie Young shared the sentiment of Cheng, saying that the increase would be acceptable if the airport had better facilities.

“To me, it’s not justifiable. They should first improve the airport before they introduce the new rate,” Young said.

Airport passengers often complain that the DZR terminal lacks space and seats for passengers, has poor ventilation and lacks water in its toilets, among other inadequacies.

Alfonso said the public was informed about the possible increase in terminal fees when a public consultation was conducted in September last year at the VIP lounge of the airport.

The DZR Airport, a gateway to Eastern Visayas, is considered to be among the busiest airports in the country. It serves flights to Manila, Cebu and Iloilo. Last year, the CAAP recorded 1.3 million passenger arrivals at the airport and reported collecting P39 million in terminal fees.

The CAAP first proposed to increase the terminal fee from P30 to P150. But it generated opposition not only from both the Tacloban City government but also from the business sector.

The CAAP said there was a need to increase the terminal fees to finance the upgrading of airport facilities. The proposed upgrading of the DZR airport included the expansion of the terminal to accommodate more passengers.

The Department of Transportation and Communications has proposed a P500-million rehabilitation plan for the DZR Airport.