Helping poor students, even after death 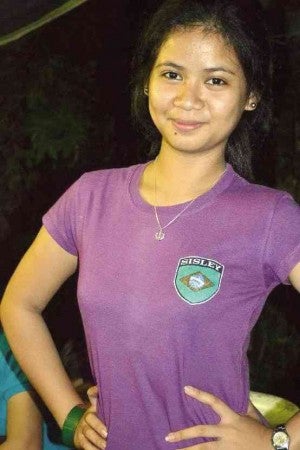 Saying it was what their daughter had always wanted, the parents of rape-slay victim Given Grace Cebanico is putting up a scholarship foundation in her name to help poor students through college.

“She had always wanted to help poor students. There were times when she gave her stipend to other students because they had to send theirs to their families back home,” said Marlene of her daughter, a computer science scholar of the Rizal provincial government and the Department of Science and Technology at the University of the Philippines Los Baños (UPLB).

In the evening of Oct. 11, 2011, Given Grace, who had just turned 19, was abducted as she was walking back to her dormitory from working on a group project. Her body was discovered the next day near a canal on the outskirts of the main UPLB campus. She was raped.

Given Grace’s death sparked public outrage in a close-knit university community that prompted UPLB and local authorities to review their security measures.

The Given Grace Academic Excellence Foundation Inc. has been registered at the Securities and Exchange Commission (SEC) on June 3. “It’s a wish granted from our prayer list,” said Marlene, who followed up on the SEC papers in between attending court trials.

Given Grace’s father, Daniel, is the foundation’s president, with Marlene as secretary. Also listed as incorporators were her grade school and high school batch mates, Jocelyn Cervo and Gia Gatapia, and the family’s church mates in Life in Christ and His Word Ministries, where Daniel is also a Christian pastor.

Marlene said there were “confirmations” or signs that strengthened their will to put up a foundation through donations. First, she said, was the encouragement of Dr. Vladimir Mariano, director of UPLB’s Institute for Computer Science, who agreed to be one of the advisers.

She said the idea was also discussed in a counseling that she and her husband attended after their daughter’s death.

“Until now, there are still those moments we feel the pain. But we believe everything happens as willed,” she said.

Marlene has returned to teaching at the University of Rizal System and Daniel, to the church ministry. Given Grace’s younger brother became active in sports.

The foundation’s incorporators are still drawing up the scholarship policies for college freshmen, setting up the Cebanicos’ residence in Binangonan, Rizal, as temporary office address.

They plan to open the foundation by next school year, but “hopefully launch it before Given’s birthday on Sept. 23,” Marlene said.

Read Next
Mayor on Iloilo ferry project critics: Go sue
EDITORS' PICK
Duterte OKs expansion of limited in-person classes in areas under Alert Level 1, 2
Expert cites need to ‘reimmunize’ whenever there’s new concerning variant
Acer starts the year off strong with the Aspire Vero National Geographic Edition
Over 3 Million worth of prizes to be won at Smart Padala’s SENDali Manalo Promo!
The best of bayside and city living at SMDC’s Sail Residences
Over 1,700 train commuters with no proof of vax were denied rides—DOTr
MOST READ
Duterte praises military but slams police for poor discipline, corruption
DOH: Experts still studying booster for those vaccinated with Sinopharm jab
Marcos Jr. visits Cebu, stands as ‘ninong’ to mayor’s son
Duterte wants Lapulapu statue in Cebu ‘bigger and higher’ than Magellan’s
Don't miss out on the latest news and information.