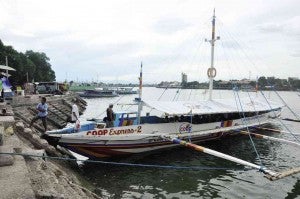 ILOILO CITY—Iloilo City Mayor Jed Patrick Mabilog will pursue a controversial ferry terminal project despite the withdrawal of support for the project by the city council.

“We will continue with the project because we believe that it is legal, valid and advantageous to the city government,” Mabilog told the Inquirer.

He said scrapping the project after the city signed a contract with private developer Double Dragon Properties Inc. “would send a wrong signal to the business community and investors.”

Mabilog said project critics “can go to court” and challenge the legality of the contract.

The city council last Wednesday passed a resolution withdrawing the authority it granted to Mabilog to enter into a contract with Double Dragon.

The council also withdrew its ratification of the 25-year contract signed on Oct. 1, 2012.

The city council cited provisions in the revenue sharing scheme which a councilor said was disadvantageous to the city government and favorable to Double Dragon. The contract provides that Double Dragon will get 95 to 99 percent of gross revenue while the city gets only 1 to 5 percent.

The firm submitted an

“unsolicited proposal” to the local government unit. The project seeks to improve passenger and cargo facilities and services for commuters and tourists traveling between Iloilo and Guimaras.

Under the agreement, which is open for extension, Double Dragon will finance, construct and operate the ferry terminal on a 1.3-hectare government land near the port of Iloilo. The terminal complex, which will serve the Iloilo-Guimaras route, will be turned over to the city government after the expiration of the agreement.

Double Dragon also insisted that the project is advantageous to the city because of the taxes and other revenues that it would generate.

Councilor Perla Zulueta and other members of the city council earlier admitted that they failed to scrutinize the details of the project even if it was presented to the council twice for approval.

The militant Bagong Alyansang Makabayan (Bayan) on Panay Island challenged the city council to pursue the termination of the contract.

But the group said opposition to the project should also focus on the need to keep basic infrastructure, like port terminals, out of private businesses.

“It should be the government that controls and manages it and not private firms earning profits from the people,”said Hope Hervilla, Bayan-Panay chair.

“The government has sufficient funds,” she said. “If it can spend for beautification projects in the city, like the Iloilo Esplanade, why not for a vital infrastructure?”