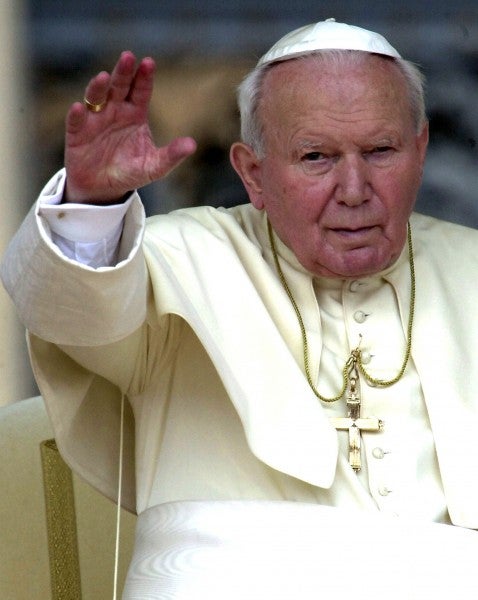 The Polish pope is likely to be canonized by the end of the year in a ceremony which could take place in December, the agency said.

Vatican theologians in June had attributed a second miracle to John Paul II, which Vatican sources had said would “amaze the world,” the report said.

The long road to sainthood requires two “confirmed” miracles, the first of which is necessary for beatification, a hurdle the Polish pope cleared just six months after his death in 2005.

That was the healing of a French nun, Sister Marie Simon-Pierre, whose recovery from Parkinson’s disease after praying for the late John Paul II’s “intercession” had no medical explanation.

The second miracle reportedly took place on the very day that John Paul II was beatified in a lavish ceremony in St. Peter’s Square on May 1, 2011, and was the healing of a woman from Costa Rica.

The go-ahead from the Vatican’s Congregation for the Causes of Saints must be followed by a written decree, signed by Pope Francis, to authorize the Polish pontiff’s canonization and announce the date it will take place.

For healings to be officially certified as miracles, they must be instantaneous, permanent and with no scientific explanation.

John Paul II was hugely popular through his 27-year papacy, and at his funeral in 2005, crowds of mourners cried “Santo Subito!” — which roughly translates as “Sainthood Now!”

According to reports in the daily La Stampa on Tuesday, the late pontiff could be formally canonized at the close of the “year of faith” along with one of his predecessors, John XXIII.

He is often compared to Pope Francis for his pastoral attitude and charisma.

In the early days of the Roman Catholic Church, martyrdom was the more usual grounds for sainthood than the performance of miracles, which in modern days are mostly posthumous.