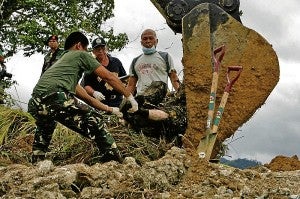 MANILA, Philippines — A backhoe driver has described in chilling detail how he used the excavator to bury the 58 victims of the Philippines’ worst political massacre, according to a copy of his deposition obtained by AFP Tuesday.

Minutes after the November 2009 shootings, Bong Andal said he excavated two pits on both sides of a rural road — one to dump the victims’ bodies and the other to bury their cars.

He said his employer, clan patriarch Andal Ampatuan Sr., had ordered him to take the excavator to the site. There, he saw the patriarch’s son and namesake, Andal Ampatuan Jr., with scores of other gunmen.

“I was shocked to see so many dead people, women and men, all of them soaked in blood. The dead were scattered along the side of the road,” the driver said in the undated statement, written in Filipino.

“It was then that Datu Unsay commanded me, ‘Bury all of them, including their cars’,” he added. “Datu Unsay” is Ampatuan Jr.’s nickname.

The clan allegedly ordered the massacre to stop a political rival, Esmael Mangudadatu, from running against one of its members for the governorship of Maguindanao, a poor farming province in the south.

The Ampatuan patriarch, two sons and several family members are in custody and on trial for the murder of 58 victims, including 32 journalists who were covering the political contest.

The backhoe driver was arrested last November after a three-year manhunt. More than 90 other suspects remain at large.

“I used the backhoe to push the vehicles into the hole first. Then I flattened them with its metal arm,” the driver said.

“Some of the vehicles had dead people inside, so I just closed my eyes out of fright and got on with it.”

After digging a second hole, the driver said he used the excavator’s arm to drag the bodies into the pit.

“After several hours, I still had not buried all of the dead and their vehicles. Then we heard a helicopter coming and all the armed men guarding me fled.”

The driver said he also fled, taking his family from his home, and spent the next few years in hiding.

He said he had worked as supervisor at a garage for the Ampatuan family’s earthmoving equipment, and had on three previous occasions seen Ampatuan Jr. murder 15 other people.

Ampatuan Jr. ordered him to use backhoes to bury six of these victims, he added.

The driver has given the statement to the justice department in a bid to be admitted as a state witness, a person familiar with the case told AFP on condition of anonymity.

The document bore a thumbmark above the driver’s name.

The source said the driver fears for his life under police detention because the government had yet to decide whether to let him testify against the Ampatuans.

This meant he and his family could not be transferred to a safe house, unlike the other state witnesses.

At least three witnesses have been killed since 2010, including a former Ampatuan family employee whose dismembered remains were found stuffed into a sack in 2012.

Justice Secretary Leila de Lima did not respond to requests for comment from AFP on Tuesday.