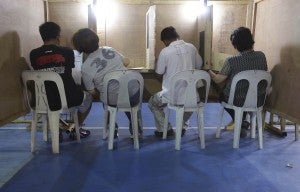 A Filipino woman leans over to consult her husband as they vote at a basketball gym used as a voting center during mid-term elections in Manila on Monday May 13, 2013. Isolated outages in the country did not disrupt voting on Election Day, as the energy department said the overall power supply was normal. AP FILE PHOTO

MANILA, Philippines – On average, Filipinos filled in only seven senatorial slots on their ballots when they voted in the 2013 midterm elections, according to the National Statistics Office (NSO).

The results of the random manual audit, which NSO participated in, of the recent elections showed that voters did not fill up all of the 12 slots for senators.

“On average, Filipino voters opted to vote for only seven senatorial candidates out of 12 possible senatorial seats,” an NSO report said.

It said that registered voters in the National Capital Region, on average, filled up 10 of the 12 Senate slots.

Voters in the Autonomous Region in Muslim Mindanao, Eastern Visayas and the Caraga Region on average chose only five senatorial candidates.

Voters in Calabarzon chose nine candidates while those in the Ilocos Region and Central Luzon voted for eight candidates.

The report showed that the accuracy rate of the precinct count optical scan machines in counting the votes for the Senate race was 99.9775 percent. Only the ARMM had a 100 percent accuracy rate.

It added that there were 184 “variances” or differences found between the PCOS count and the manual audit.

“Among the regions, (Central Luzon) registered the largest variance of 44 votes difference. This was followed by (Western Visayas) with 20 votes’ difference and  (the Ilocos and Bicol region) with 16 votes’ difference.,” the report said.