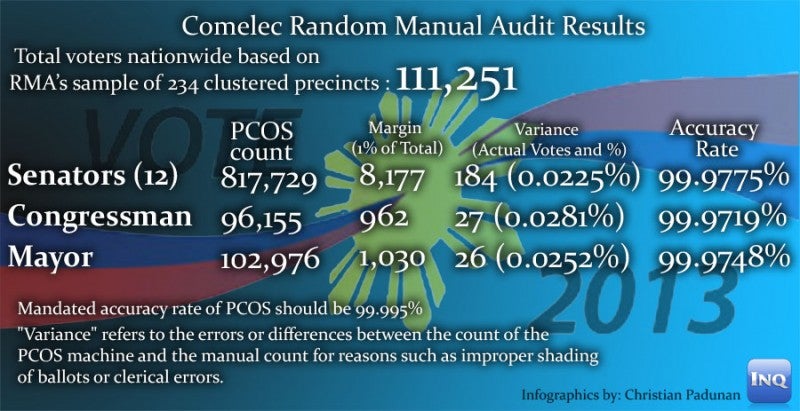 “This validates the accuracy of the 2013 national elections,” Commission on Elections (Comelec) Chaiman Sixto Brillantes Jr, told reporters Friday in a press conference.

Ambassador Henrietta De Villa led the presentation as chairperson of the RMA committee, along with Chairman Brillantes and Commissioner Christian Robert Lim.

De Villa described the 2013 midterm elections as “very credible” based on the results of the RMA.

For the senatorial race, the nationwide average accuracy was 99.9775 percent. While in the House of Representatives it was 99.9719 percent and for the mayoralty races it was 99.9748 percent.

National Statistics Office (NSO) Administrator Carmelita Ericta, who headed the analysis of the RMA, said that the difference was “not significant.”

The RMA was conducted in 234 randomly selected clustered precints nationwide to ensure that the Precint Count Optical Scan (PCOS) machines counted the votes on the ballots accurately.

De Villa pointed out that the automated election machine count and manual count wo never match exactly because of the different appreciation of the ballots between human and machine.

She said that they needed at least 68 validators from Comelec, 22 RMA trainors, 234 provincial elections supervisors as coordinators of the RMA.

She said that there were instances when voters used check marks, or encircled the ovals instead of shading them. The RMA teams counted these but the PCOS machines did not.