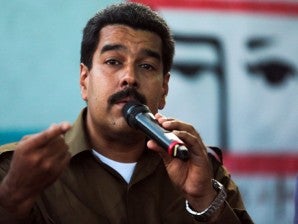 CARACAS – President Nicolas Maduro said Wednesday that Venezuela would “almost certainly” grant political asylum to Edward Snowden if the fugitive US intelligence leaker applied for it.

“If he asked us for it, we would think about it and we would almost certainly give it to him, because political asylum… is an international human rights institution to protect the persecuted,” Maduro said at a public event in central Venezuela.

The former National Security Agency contractor, wanted for espionage by Washington after he revealed massive US surveillance programs, spent a fourth day at a Moscow airport on Wednesday with his travel plans still a mystery.

Snowden has applied for asylum in Ecuador, but Ecuadoran Foreign Minister Ricardo Patino indicated on Wednesday that it could take as long as two months for Quito to make a decision.

The 30-year-old IT specialist left his job in Hawaii on May 20 and arrived in Russia from Hong Kong on Sunday, but failed to board a Cuba-bound plane on which he was registered for Monday.

The United States has urged Russia to extradite Snowden to the United States, but Russian President Vladimir Putin said the US fugitive was free to leave the country.

Snowden’s extended stay at the Russian airport has raised comparisons to the Tom Hanks movie “The Terminal” about a man stranded in a New York airport, and Maduro suggested that a film should be made about the US fugitive titled “Terminal Snowden.”