For gay marriage across US, more battles ahead | Inquirer News
Close
menu
search

For gay marriage across US, more battles ahead 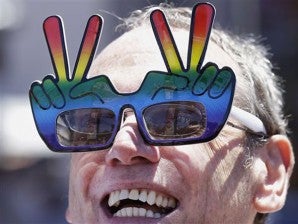 Joe Mac smiles while talking with people in the Castro neighborhood in San Francisco, Wednesday, June 26, 2013. In a major victory for gay rights, the Supreme Court on Wednesday struck down a provision of a federal law denying federal benefits to married gay couples and cleared the way for the resumption of same-sex marriage in California. (AP Photo/Jeff Chiu)

NEW YORK — Even as they celebrate a momentous legal victory, supporters of gay marriage in the U.S. already are anticipating a return trip to the Supreme Court in a few years, sensing that no other option but a broader court ruling will legalize same-sex unions in all 50 states.

In the meantime, as one gay-rights leader said, there will be “two Americas” — and legal complications for many gay couples moving between them.

Wednesday’s twin rulings will extend federal recognition to same-sex marriages in the states where they are legal and will add California — the most populous state — to the 12 others in that category. That will mean about 30 percent of Americans live in states recognizing same-sex marriage.

But the court’s rulings have no direct effect on the constitutional amendments in 29 states that limit marriage to heterosexual couples. In a handful of politically moderate states such as Oregon, Nevada and Colorado, those amendments could be overturned by ballot measures, but that’s considered highly unlikely in more conservative states.

“It would be inefficient to try to pick off 30 constitutional amendments one by one,” said Fred Sainz of the Human Rights Campaign, a national gay-rights group. “Eventually this will have to be settled by the Supreme Court.”

The Human Rights Campaign’s president, Chad Griffin, told supporters outside the Supreme Court building that the goal would be to legalize same-sex marriage nationwide within five years.

To sway the justices in such a time frame, activists plan a multipronged strategy. In addition to possible ballot measures in a few states, they hope lawmakers will legalize same-sex marriage in states which now offer civil unions to gay couples, notably New Jersey, Illinois and Hawaii.

There also will be advocacy efforts in more conservative states, ranging from expansion of anti-discrimination laws to possible litigation on behalf of sex-couples there who are denied state recognition even though they married legally in some other jurisdiction.

The Supreme Court’s decisions “underscore the emergence of two Americas,” Griffin said. “In one, LGBT (lesbian, gay, bisexual and transgender) citizens are nearing full equality. In the other, our community lacks even the most basic protections.”

Jonathan Rauch, a senior fellow with the Brookings Institution think tank in Washington, suggested that efforts to end that division would not be easy, given that many states have electorates that seem solidly opposed to gay marriage.

“The fight is far from over,” Rauch wrote in a commentary. “By refusing to override those majorities, the court green-lighted the continuation, probably for a decade or more, of state-by-state battles over marriage.”

One example of the upcoming strategy: The American Civil Liberties Union announced Wednesday that it has hired Steve Schmidt, former communications director for the National Republican Congressional Committee, to build support among Republican state politicians for striking down gay-marriage bans.

On the conservative side, there was deep dismay over the Supreme Court rulings but little indication of any new strategies or initiatives.

The U.S. Conference of Catholic Bishops, which staunchly opposes same-sex marriage, called upon Americans “to stand steadfastly together in promoting and defending the unique meaning of marriage: one man, one woman, for life.”

Lee Badgett, an economics professor at the University of Massachusetts, predicted that the ruling on federal recognition would prompt thousands of gay couples to get married, now that there were additional financial incentives to so.

This group could include couples in states which don’t recognize same-sex marriage but who are willing to travel to a state that does recognize such unions.

While gay-rights activists pursue their ultimate goal of nationwide recognition of same-sex marriage, the short-term legal situation for many gay couples could be complicated.

The National Conference of State Legislatures said the situation was clear for married gay couples in the 13 states recognizing same-sex marriage: They will be eligible for all federal marriage benefits.

“Outside of these states, federal marriage benefits become more complicated, as many commonly thought-of federal benefits, such as jointly filing on federal income taxes, are tied to a married couple’s place of residence,” the conference said.

Gay-rights activists immediately began lobbying the Obama administration and other federal officials to extend as many benefits as possible on the basis of where a gay couple’s wedding took place, not on the state where they live.

Evan Wolfson of Freedom to Marry, one of the groups most active in building support for same-sex marriage, urged the administration to adopt a “clear and consistent” standard that would apply equally to all married gay couples, regardless of their state of residence.

“Marriage should not flutter in and out like cellphone service,” he said. “When it comes to federal programs, even if states are discriminating, the federal government should not.”

Read Next
Mandela on life support as hopes for recovery dim
EDITORS' PICK
NUSTAR Resort and Casino: Cebu’s next lifestyle and leisure gem
EDITORIAL: Solo parents deserve more
Enjoy the best of city living at SMDC’s Fame Residences
Step up your vlog game with vivo’s newest smartphone
No more need to quarantine foreign arrivals if fully vaxxed
Guanzon: Senator behind delay in Marcos DQ case
MOST READ
Guanzon to Bongbong Marcos camp: How do you know I had ‘minority opinion’ on DQ cases?
Guanzon gives Ferolino until Monday to release reso on Bongbong Marcos’ DQ cases, or else
Guanzon: Senator behind delay in Marcos DQ case
Marcos a no-show in another GMA interview
Don't miss out on the latest news and information.