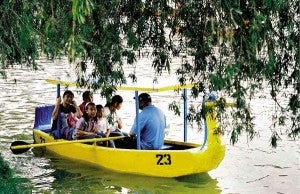 BOAT RIDES in Burnham Lake are the top attraction of Burnham Park in Baguio City. Residents and tourists enjoy the open space provided by the Melvin Jones Football Grounds (above photo) in Burnham Park. The grounds also serve as venue for sports activities, concerts and various community events. PHOTOS BY EV ESPIRITU

BAQUIO CITY, Philippines—There are several parks named after Chicago architect Daniel Burnham around the world, but only two Burnham Parks were shaped by the early 20th-century visionary.

Chicago City boasts of a 4-mile long lakefront Burnham Park, which the Encyclopedia of Chicago describes as part of a seamless integration of concrete buildings and highways and of its “systems of recreation,” as incorporated by Burnham and fellow architect Edward Burnett in the 1906 Plan of Chicago.

And then there is the Philippines’ Burnham Park, with its iconic manmade lake, which Burnham himself sketched out as he designed the American colonial government’s Baguio City in 1904.

The park has become one of the most recognized tourist spots in the country, but it took presidential action for Baguio to finally own Burnham Park in 2008, shortly before it celebrated its centennial on Sept. 1, 2009.

And once it took responsibility for the park’s maintenance and improvement, the city government has been hounded by criticism, suspicion and conspiracy theories.

The latest controversy is an online petition objecting to its eventual privatization as expressed by a fencing project that encircles the 328,390-square meter facility, as well as government plans to install gates there.

The petition, initiated by local artist Karlo Altomonte, also accused the government of straying from the Burnham plan for Baguio by reminding it that Burnham had “reserved the biggest piece of level land … for the enjoyment of the general public, particularly those of moderate means, and to this day it serves that purpose.”

Burnham had been credited for popularizing the City Beautiful movement, which advocated fusing the dense populated areas of a growing city with parks that serve as breathing spaces.

“Parks were central to the City Beautiful impulse and to Burnham’s sense of civic harmony,” according to the website, http://www.encyclopedia.chicagohistory.org. It said Burnham pursued this urban philosophy after observing that “the shapelessness of American cities was due in large measure to the extraordinary speed with which they had developed: between 1860 and 1910, the number of American cities with more than 100,000 residents rose from eight to 50 [and by] 1910, several cities had passed the one million mark.”

Cordelia Lacsamana, city environment and parks management officer, said it was the same extraordinary speed of mismanaged urban growth which had plagued Baguio, a century after the Burnham plan.

But the local government had never considered breaking up Burnham Park to accommodate these expansions, Lacsamana said. 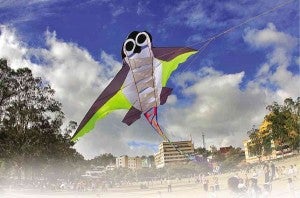 Park revenues amount to only P8 million a month, which would not cover the cost of its upkeep, as well as the expenses necessary to drive away ambulant vendors and catch petty criminals roaming the park, she said.

“Think of how people treat an area once they realize it’s a gated community. There are rules, and they learn to follow those rules. We are not barring anyone from enjoying the park. But we want them to learn how to take care of it. Once public behavior changes, these fences will be torn down,” Lacsamana said.

She said the fence and the gates would also help the city focus instead on employing the new Burnham Park master plan, which was financed and designed by the University of the Cordilleras (UC).

The city government recently improved the rose garden and introduced a new fountain beneath the bust of Burnham, following the prescriptions of the master plan.

It also submitted to the National Economic and Development Authority a plan to bid out the development and management of the park’s Athletic Bowl, guided by the UC master plan.

Mayor Mauricio Domogan said the public-private partnership would not prompt Baguio to concede control over the park to an investor. But the master plan never encouraged privatization, nor did it envision a fence, said its key architect, UC professor Robert Romero.

“We planned for the park, believing it would be financed solely by the city. We also did not plan to keep the park gated and fenced off. They could have built shrubbery around the park instead,” he said.

“Burnham designed an open park. We prefer to keep Burnham Park accessible to everyone,” Romero said.