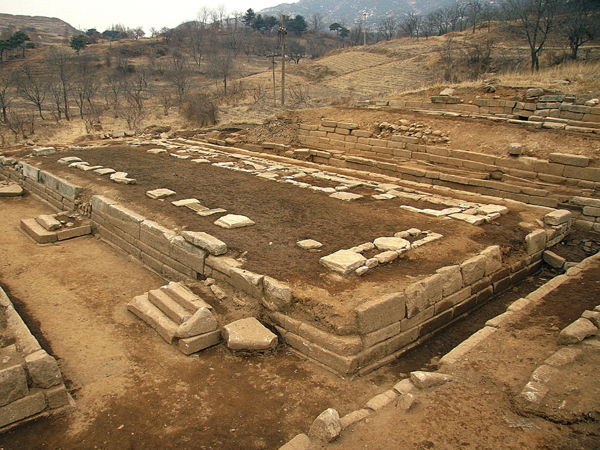 This undated photo shows a ruins of Manwoldae in Kaesong, North Korea. The remains of a fortress that once surrounded Kaesong, the ancient capital of Korea’s Koryo Dynasty, is among sites in North Korea that made it onto UNESCO’s World Heritage list on Sunday, June 23, 2013. AP Photo/Yonhap

KAESONG — The remains of a fortress that once surrounded Kaesong, the ancient capital of Korea’s Koryo Dynasty, are among sites in North Korea that made it onto UNESCO’s World Heritage list on Sunday.

North Korea’s bid to have the sites added to the list was approved at a UNESCO meeting in Phnom Penh, Cambodia.

Kaesong, located just north of the border with South Korea, was the capital of the kingdom that ruled Korea from 918 to 1392. It’s also where the two Koreas ran a joint factory park until tensions forced its closure this spring.

Twelve sites added include the ruins of the Manwoldae palace; a 1,000-year-old academy that was the top school during that era; relics housed at a museum at the school; and the mausoleum of King Kongmin.

“These valuable cultural relics are the pride of our nation, and they are precious cultural relics that show the long history of our nation,” Kim Jin Sok, a researcher at Kaesong City Management Office for Preserving National Heritage, told The Associated Press. “Also, these relics, some preserved for very long periods, are well known as relics with which we can stand proud in the eyes of the world.”

A North Korean complex of ancient tombs from a previous kingdom won heritage status in 2004.