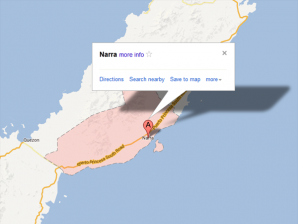 “Combined elements of the coastguard and the navy have found parts of the debris and it appears to be the rear cargo compartment of the vessel,” Okol said.

“We are still holding out hope that the two pilots were able to eject… we are searching for them,” he said.

In a separate interview, however, Philippine Coast Guard (PCG) spokesperson Lt. Greaneta Jude said they have located the nose part of the ill-fated plane floating in the waters just one nautical mile off Puerto Princesa Bay.

“We found debris of the missing OV-10 this morning. Based on the debris that we saw, we can assume that the plane had crashed and landed in the waters,” Jude said.

Commander Armand Balilo, also  from the PCG,  said in a text message that the cargo bay door of the OV-10 plane (tail no. 360) that went missing was found and retrieved at about 7:10a.m. one nautical mile from the alleged crash site, or one nautical mile east of Puerto Princesa Airport

Authorities have declined to release the names of the two missing pilots as their families have yet to be notified.

Okol said the pilots had radioed the control tower that they were five nautical miles off the airfield and preparing to land before they crashed.

“At this point, we could not yet speculate as to what exactly happened,” he said, adding the weather was clear.

The crash is the latest in a string of deadly accidents involving surplus and often old foreign aircraft acquired by the Philippine military.

The air force’s fleet of 30 Broncos were acquired from the United States in 1991 and Thailand in 2004.

Developed in the 1960s as a counter-insurgency aircraft by the US Air Force, the Broncos can carry heavy ammunition for a few hours in the air.

They are used primarily for close air support missions against Muslim and communist insurgents, mainly on the southern island of Mindanao, Okol said.

However, they are also used to monitor the archipelago’s extensive coastal areas, as well as for search and rescue missions in the disaster-prone Philippines, he added.

Okol would not say exactly how old the crashed plane was, but insisted that all of the Broncos were in good condition.

“They have received a good number of upgrades, and we maintain them very well,” he said.

The Philippine military is among the most poorly equipped in the region, and past modernization efforts have consisted mostly of surplus hardware acquired from its traditional ally, the United States.

In May, two pilots were killed when an air force trainer plane crashed north of Manila

In 2010, eight air force personnel and a civilian were killed when a light cargo airplane crashed in the southern city of Cotabato.