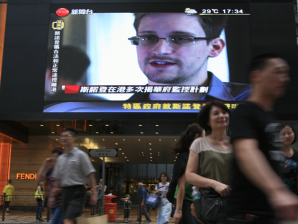 Snowden, who is wanted on US espionage charges, flew to Moscow from Hong Kong on Sunday and is seeking asylum in Ecuador, according to the foreign minister of the South American country.

The source declined to provide any further details of the US move to revoke Snowden’s passport.

Ecuador has been sheltering WikiLeaks founder Julian Assange at its London embassy for the past year.

On its Twitter feed, WikiLeaks said Snowden “is bound for the Republic of Ecuador via a safe route for the purposes of asylum, and is being escorted by diplomats and legal advisors from WikiLeaks.”

“Mr Snowden requested that WikiLeaks use its legal expertise and experience to secure his safety. Once Mr Snowden arrives in Ecuador his request will be formally processed,” it added.

Snowden was charged with espionage by the US authorities last week after revealing details about a vast National Security Agency program of phone and Internet surveillance.