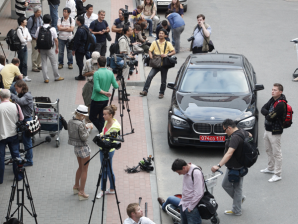 “Mr Edward Snowden, the American whistleblower who exposed evidence of a global surveillance regime conducted by US and UK intelligence agencies, has left Hong Kong legally,” WikiLeaks said in a statement.

“He is bound for the Republic of Ecuador via a safe route for the purposes of asylum, and is being escorted by diplomats and legal advisors from WikiLeaks.”

Snowden, 30, was to head to Venezuela via Cuba after he arrived in Moscow on Sunday, Russian media reported earlier.

Snowden requested that WikiLeaks “use its legal expertise and experience to secure his safety”, the statement added.

WikiLeaks, whose founder Julian Assange has spent a year holed up in Ecuador’s London embassy, said Snowden’s asylum request will be formally processed once he arrives at his final destination.

“The WikiLeaks legal team and I are interested in preserving Mr Snowden’s rights and protecting him as a person,” said former Spanish judge Baltasar Garzon, legal director of Wikileaks and lawyer for Assange.

“What is being done to Mr Snowden and to Mr Julian Assange – for making or facilitating disclosures in the public interest— is an assault against the people.”

Assange, a 41-year-old former computer hacker from Australia, walked into the Ecuador embassy on June 19, 2012 and claimed asylum in a sensational bid to avoid extradition to Sweden for questioning over alleged sex crimes.

The South American country granted his request, accepting his fears that if sent to Sweden he might be passed on to the United States and prosecuted for publishing thousands of classified war logs from Iraq and Afghanistan and a cache of diplomatic cables.

Britain has refused to grant him safe passage to Ecuador.