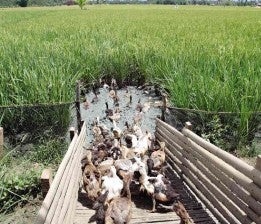 ANTIPOVERTY WARRIORS Ducks in a farming area in Butuan City do the job of enriching the soil at the least cost for double or triple the harvest in an ecologically friendly way. GRIG C. MONTEGRANDE

BUTUAN CITY, Agusan del Norte—The solemnity of the occasion was not lost on folk and fowl.

As a CD of “The Prayer” by Andrea Bocelli and Celine Dion was played at the blessing of a duck-breeding farm, a hush fell on the crowd of 150 mostly farmers, their heads bowed.

Even the squeals in the hatchery went a decibel lower.

All appeared to appreciate the haunting melody coming out of the speakers, “Let this be our prayer when we lose our way, lead us to the place, guide us with your grace ….”

But frantic cries of “quack, quack” soon erupted after Archbishop Antonio Ledesma, who presided at the ceremony, sprinkling holy water all around, spelled out the mission of the hatchery’s inhabitants to be dispatched to the front line of the Church-backed war against poverty.

Like the birds and the animals God had ordered Noah to gather in his ark before The Deluge, the waddling warriors would offer themselves as a “gift of salvation” to impoverished Filipinos, said the bishop of Cagayan de Oro City.

“Make the ducks serve our needs … forever and ever,” intoned the prelate, wearing a polo barong, a white stole embroidered with green-colored crosses on either ends hanging from his neck.

The hatchery was the first to be set up by the Philippine Agrarian Reform Foundation for National Development (Parfund), a civil society group.

The objective was to help fill a funding need for cash-strapped beneficiaries of the late President Corazon Aquino’s land-to-the-tiller program, and help make them farmer-entrepreneurs.

The project in Butuan is a result of a 16-year initiative to get ducks to do the job of enriching the soil at the least cost for double or triple the harvest in an ecologically friendly way.

These warriors fertilize the fields with their droppings, eat or crush snails, worms, bugs, stem borers and green leaf hoppers, eliminating the use of fertilizers and pesticides.

Weeks-old chicks are let loose as the farmers begin to plant rice. They swim and waddle on the waterlogged arena, bumping and tweaking the plants. All the rocking and rolling produce healthy grains, according to Parfund experts.

It is a phenomenon, Al Gore says in his Academy Award-winning documentary “An Inconvenient Truth,” that leads to the melting of icebergs and rising sea temperatures that could cause oceans to rise and inundate coastal cities like Manila, which is below sea level.

Around 150 ducks are needed for a hectare of rice. The expense is around P10,000, half of the amount for the net to pen the fowl and the rest for the acquisition of the chicks and feeds. Because the net is good for five years, that means cost will be cut in the succeeding years.

In comparison, investment in a rice field using fertilizers and pesticides is around P25,000 per hectare, in addition to manpower to control weeds and snails—the yummy duck favorites. The harvest is more than 5.8 tons of rice per hectare in the duck farm—nearly twice the yield from the chemical-energized paddies.

By the time the rice is harvested in about three and a half months, the birds are full-grown for the ultimate sacrifice—to be sold in the market, slaughtered and turned into “patotin,” which tastes pretty much like Peking Duck, duck burger, or foie gras for the more discriminating palates. “Pato” is Filipino for duck.

Or the ducks are allowed to lay eggs, which are turned into “balut”—a mouthwatering 7-day-old fetus that, taken with beer, is regarded as an aphrodisiac. Parfund people said the balut market in Butuan was more than 100,000 a week, mainly flown from Manila to Cagayan de Oro and transported to the bustling city that used to be a hick logging town.

The national balut production is around 10 million annually—mainly from the Candaba swamps in Pampanga and the southern Luzon region. Because of its sex appeal and nutritious qualities, balut is making life difficult for such entrepreneurial pursuits as enlisting ducks in growing organic rice.

“We need a good supply of eggs so we will have good ducks,” said Jose Noel “Butch” Olano, Parfund’s long-haired executive director who sports a Charles Bronson moustache.

And so the hatchery was formed, said Olano, a former agrarian reform undersecretary in the Fidel Ramos presidency that commentators said had accomplished more than any other administration in pushing forward Corazon Aquino’s Comprehensive Agrarian Reform Program (CARP).

With a P6.7-million loan from the NGO Peace and Equity Foundation, Parfund constructed the breeding center and incubator, and purchased mother ducks to supply ducklings to some 1,800 farmers under a five-year project. It also secured a P2.16-million grant for program management, capacity building, field coaching and monitoring of farmers.

At the time of the blessing, the hatchery had 5,000 ducks. The birds produce 3,000 eggs a day. Baby ducks are handed out to farmers. Parfund is paid back cash or kind—ducklings or rice after harvest.

In her 1-hectare farm at Maramag town in Bukidnon, Julia Manguera said she was able to harvest 9 tons of rice—almost three times the normal 3.8 tons per hectare of a paddy using chemicals.

In nearby Esperanza town, Emmanuel Pepito has an army of ducks he had set loose in his 26-hectare farm, in tracts encircled with nets.

“You need not do too much work in the field, the ducks do it for you,” he told the Inquirer during a visit in April. He held drooping stalks of rice so heavy with grains, proudly predicting a fine harvest.

Last month, the 48-year-old Pepito reported that he had harvested more than 6 tons of rice from each hectare of riceland—nearly twice the yield from the chemical-laced paddies.

Parfund’s target is people like Joseph Aguilar, 44, a CARP beneficiary. For the first time this year, Aguilar launched the duck-rice technology in his 2-hectare farm at Catmonan in Esperanza he secured under CARP five years ago.

He said using chemicals had cost him P30,000. But with some 200 ducks in the field enclosed in nets his expense totaled only P5,000.

Ledesma said there was a lot of interest in the rice-duck technology in Mindanao among farmers and local government officials. This was why the pilot breeding center was set up in Agusan.

He said it could be a model for farmers in Hacienda Luisita, the sprawling sugar hacienda owned by the family of President Aquino, and elsewhere as the Department of Agrarian Reforms dismantles nearly 1 million hectares of the nation’s prime agricultural estates that have so far eluded coverage of the land program.

Corazon Aquino’s CARP was the centerpiece of her presidential campaign promise to promote social justice, ease poverty, and remove one of the major causes of the world’s longest-running communist insurgency waged by the New People’s Army.

The hacienda was purchased in 1957 from its Spanish owners then grappling with labor unrest in the Central Luzon plain that had become the seat of a Marxist peasant rebellion. The government of Ramon Magsaysay guaranteed the dollar loan for the acquisition on condition the estate would be sold to tenants at cost in 10 years.

In November 2011, the Supreme Court ordered the estate’s distribution to farmers, declaring that a stock distribution option under CARP had failed to improve the lives of the tenants.

Ledesma said the record of implementation of CARP through a quarter century had been “spotty.”

“It’s been overtaken by another generation,” he said in a candlelight interview in a restaurant experiencing the usual three-hour blackout as a result of a continuing electric power shortage in Mindanao.

“The original farm workers are aging. There’s a new generation of potential beneficiaries. That’s why in Hacienda Luisita, they are having difficulty identifying the beneficiaries. They now have their own second or third generation to take care of the plantation.”

Ledesma did not sound very sanguine about the CARP implementation.

“If the government has the political will to really do something about agrarian reform, things can change, things can really develop,” said Ledesma, who is one of the leading lights of a movement by civil society groups against poverty.

He recalled a march by farmers from Mindanao and Negros last year and a hunger strike in December to press President Aquino to distribute lands locked in interminable legal struggles.

“They’ve gone through that democratic extreme to show that not everything is right,” Ledesma said. “I think that is still one issue that is feeding the movement of the NPA. So long as there is no genuine agrarian reform, there will always be some kind of social unrest in the countryside. In places like Bicol, Samar, that’s still the source of the NPA’s recruitment drive—landlessness among small farmers.”

The duck-rice farming technology was developed in the late 1980s in Japan by Takao Furuno, an imaginative farmer who used ancient agro-ecological principles that do not require a large energy input but result in increased productivity.

During a visit to the Philippines, Furuno took Jose Apollo Pacamalan under his wing and got the Filipino to attend seminars that he conducted on the subject in Japan and South Korea, and to visit projects in Asia.

Pacamalan, 43, an agriculture graduate of Xavier University with a master’s degree in Environmental Management from Flinders University in Adelaide, Australia, introduced the technology in pilot projects of Parfund in Mindanao.

“You have to have a passion for this technology,” he said. “You have to think, sleep, eat duck all the time.”

He recalled that as a young farmhand, he used to spray rice fields with chemicals. “At the end of the day, I had a terrible headache because of the fumes I inhaled.”

Pacamalan is upbeat that the Parfund technicians are looking at ducks ending up as processed food for fine dining.

At a mountain resort along the border of Bukidnon and Davao City (Buda), Fr. Franco Uras, an Italian with the Salesians of Don Bosco, is teaching “lumad” (indigenous) youths how to make bottled duck liver pâté in olive oil, meat pâté, meat “soppresata” and “bocconcini” for delis, luxury restaurants and hotels in Davao City.

The 69-year-old Uras, who came to the Philippines half a century ago and never left, runs a shelter and a health education program for the tribal natives of Buda, raising funds for them by holding food festivals. He is an excellent cook, having learned from his mother in Sardinia.

The priest grows 21 types of herbs found in the Mediterranean that thrive in the highland climate of Buda. He uses them to concoct the mouthwatering wonders favored by gourmands.

“The university of necessity makes you create many things,” he said.

Ducks are fleshing out his creations. If only they knew what fate awaits them, they’d probably scream “quack, quack!”