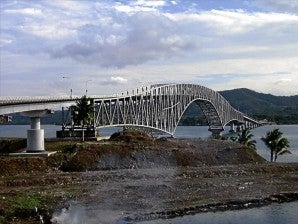 TACLOBAN CITY – A driver was killed on Friday when a six-wheeler cargo truck fell off the San Juanico Bridge, which connects the islands of Samar and Leyte.

The driver, identified as Dexter Omega, was already dead when he was pulled out from the truck by rescuers from the City Disaster Risk Reduction Management Council, said Arianne Maypa, CDRRMC administrative and training chief.

Passenger Bitoy Areso escaped unhurt when he managed to jump off the truck before it plunged into the water. He was brought to the police station in Tacloban City for investigation.

The cargo truck, which was loaded with paints and pieces of plywood, was still in the water since the CDRRMC didn’t have the equipment to pull it out, said Maypa.

Based on police initial investigation, the cargo truck with plate number GSG 738, was crossing the bridge from Tacloban City about 4:30 p.m. when it reportedly lost its brakes.

Omega lost control of the vehicle, which first hit more than 10 railings of the 2.1 km-bridge before it plunged into the waters on the Leyte side, said Maypa said.

He said the truck was owned by Nador Capangalan of Catbalogan City in Samar.