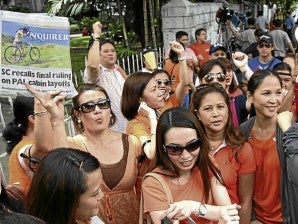 Some 70 members of the Flight Attendants and Stewards Association of the Philippines (Fasap) stage a rally on Tuesday outside the Supreme Court building in Manila to protest the court’s recall of its September 7 ruling. The protesters express hope the high court will do what is just and right. FILE PHOTO

In a 35-page decision dated June 18, the appeals court 17th division through Associate Justice Ramon Cruz partly granted PAL’s plea to set aside the order of the Secretary of Labor, which granted P220-million worth of wage increase to members of the Flight Attendant and Stewards Association of the Philippines (FASAP).

Instead, the appeals court ordered PAL and FASAP to implement their Collective Bargaining Agreement covering the period from July 16, 2007 to July 25, 2010.

“Wherefore, the petition is partly granted, the decision dated December 23, 2010 and order dated April 1, 2011 of the Secretary of the Department of Labor and Employment are reversed and set aside, insofar as the salary increase and compulsory retirement age are concerned,” the appeals court said.

With regards to salary increase, the court said that the following would be followed: “PAL shall grant a lump sum salary increase in the amount of P100 million to FASAP members applicable to the period starting from July 16, 2007 to July 25, 2010 or the remaining three year period of the 2005-2010 CBA.”

The appeals court reversed the order of the DoLE saying the Secretary of Labor based her findings on financial records that were not relevant to PAL.

“We are constrained to disagree with her findings. They do not conform to the evidence on record and are not supported by substantial evidence,” the court said.

DoLE based its findings on financial statements for fiscal year 2010 to 2011.

“The use of irrelevant document to support her finding casts serious doubt as to whether there is substantial evidence to support her conclusion and consequent award,” the decision read.

Records showed that PAL suffered losses of $297.8 million in fiscal year 2008 to 2009 and $14.3 million in the fiscal year ending March 2010.
“There is surfeit proof establishing the precarious financial condition of PAL,” the decision read.

Regarding the compulsory retirement age, the appellate court ruled:

“Retirement is the result of a bilateral act of the parties, a voluntary agreement between the employer and the employee whereby the latter, after reaching a certain age, agrees to sever his or her employment with the former,” the appeals court said.

FASAP was “not coerced or forced by PAL to sign the previous CBAs… fully aware that it provided a specific retirement age for flight attendants,” the appeals court added.