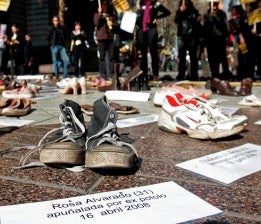 In this Thursday, July 30, 2009 file photo Shoes representing female victims of violence are displayed by protesters from the Chilean Network Against Domestic and Sexual Violence in Santiago. The sign at bottom reads in Spanish “Rosa Alvarado, 31, stabbed by ex-boyfriend, 16 April 2008.” About a third of women worldwide have been physically or sexually assaulted by a former or current partner, according to the first major review of violence against women. AP

LONDON— In the first major global review of violence against women, a series of reports released Thursday found that about a third of women have been physically or sexually assaulted by a former or current partner.

The head of the World Health Organization, Dr. Margaret Chan, called it “a global health problem of epidemic proportions,” and other experts said screening for domestic violence should be added to all levels of health care.

Among the findings: 40 percent of women killed worldwide were slain by an intimate partner, and being assaulted by a partner was the most common kind of violence experienced by women.

Researchers used a broad definition of domestic violence, and in cases where country data was incomplete, estimates were used to fill in the gaps. WHO defined physical violence as being slapped, pushed, punched, choked or attacked with a weapon. Sexual violence was defined as being physically forced to have sex, having sex for fear of what the partner might do and being compelled to do something sexual that was humiliating or degrading.

The report also examined rates of sexual violence against women by someone other than a partner and found about 7 percent of women worldwide had previously been a victim.

In conjunction with the report, WHO issued guidelines for authorities to spot problems earlier and said all health workers should be trained to recognize when women may be at risk and how to respond appropriately.

Globally, the WHO review found 30 percent of women are affected by domestic or sexual violence by a partner. The report was based largely on studies from 1983 to 2010. According to the United Nations, more than 600 million women live in countries where domestic violence is not considered a crime.

The rate of domestic violence against women was highest in Africa, the Middle East and Southeast Asia, where 37 percent of women experienced physical or sexual violence from a partner at some point in their lifetimes. The rate was 30 percent in Latin America and 23 percent in North America. In Europe and Asia, it was 25 percent.

Some experts said screening for domestic violence should be added to all levels of health care, such as obstetric clinics.

“It’s unlikely that someone would walk into an ER and disclose they’ve been assaulted,” said Sheila Sprague of McMaster University in Canada, who has researched domestic violence in women at orthopedic clinics. She was not connected to the WHO report.

However, “over time, if women are coming into a fracture clinic or a pre-natal clinic, they may tell you they are suffering abuse if you ask,” she said.

For domestic violence figures, scientists analyzed information from 86 countries focusing on women and teens over the age of 15. They also assessed studies from 56 countries on sexual violence by someone other than a partner, though they had no data from the Middle East. WHO experts then used modeling techniques to come up with global estimates for the percentage of women who are victims of violence.

Accurate numbers on women and violence are notoriously hard to pin down. A U.S. government survey reported almost two years ago that 1 in 4 American women said they were violently attacked by their husbands or boyfriends, and 1 in 5 said they were victims of rape or attempted rape, with about half those cases involving intimate partners.

Some experts thought the rape estimate was extremely high but said it may have to do with the definition of assault. The results were from a survey that did not document the claims, which were made anonymously.

In a related paper published Thursday online in the journal Lancet, researchers found more than 38 percent of slain women are killed by a former or current partner, six times higher than the rate of men killed by their partners.

Heidi Stoeckl, one of the authors at the London School of Hygiene and Tropical Medicine, said the figures were probably an underestimate. She and colleagues found that worldwide, a woman’s highest risk of murder was from a current or ex-partner.

In countries like India, Stoeckl said “honor killings,” where women are sometimes murdered over dowry disputes or perceived offenses like infidelity to protect the family’s reputation, add to the problem.

She also noted that women and men are often slain by their partners for different reasons.

“When a woman kills her male partner, it’s usually out of self-defense because she has been abused,” she said. “But when a woman is killed, it’s often after she has left the relationship and the man is killing her out of jealousy or rage.”

“When a woman is killed by a partner, she has often already had contact with the police,” she said.

Stoeckl said there should be more protection for women from their partners, particularly in cases where there is a history of violence.

“There are enough signs that we should be watching out for that,” she said. “We certainly should know if someone is potentially lethal and be able to do something about it.”