Indonesia says Singapore ‘behaving like a child’ over haze 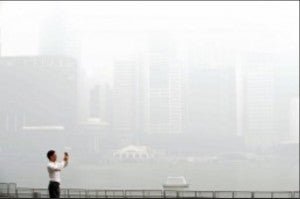 JAKARTA – Indonesia on Thursday accused Singapore of “behaving like a child” by complaining about severe haze from raging forest fires on Sumatra island that has cloaked the city-state.

“Singapore should not be behaving like a child and making all this noise,” Agung Laksono, the minister who is coordinating Indonesia’s response to the haze crisis, told reporters in Jakarta.

“This is not what the Indonesian nation wants, it is because of nature.”

The minister for people’s welfare also said Jakarta would reject any offer of financial aid from Singapore unless it was a large amount.

“Unless (Singapore) wants to give us a large amount, we won’t consider accepting it,” he said. “If it is only half a million, or one million dollars, we don’t need that. We would rather use our own national budget.”

The comments came as the neighbours prepared to hold emergency talks in Jakarta to ease the severe smog enveloping the city-state.

Singapore’s air pollutant index was again hovering around the “hazardous” level of 301 at midday, close to the all-time high of 321 set the night before. Any reading above 200 is considered threatening to health.

Laksono said investigations were under way to find out which company was responsible for the haze.

“There are Indonesian, Singaporean and Malaysian companies there,” he said, echoing previous comments from officials in Jakarta seeking to shift the blame away from solely Indonesian firms.