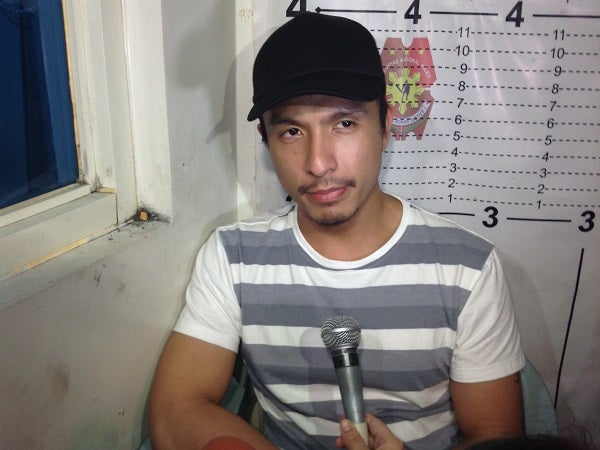 Marco Morales being interviewed by the media at the Makati police station. Photo by Niña P. Calleja/Philippine Daily Inquirer

MANILA, Philippines – The man dubbed by the police as the “motel skipper” was finally arrested Wednesday morning just as he was about to leave another hotel without paying his bill.

Marco Gonzaga Saca—who used the screen name Marco Morales when he appeared in several independent films from 2008 to 2010—was taken into custody by Makati policemen at 4:20 a.m. after they were alerted by the management of St. Giles Hotel on Makati Avenue.

Senior Superintendent Manuel Lukban, Makati police chief, said that Saca initially resisted arrest, telling them that someone would be coming shortly to pay his bill.

When interviewed by reporters later on at the police station, Saca owned up to most of the accusations against him although he denied that he stole anything from the establishments he checked into.

“I just feel so bad that someone was hurt. I just needed to get through that barricade, that’s why I did that. To my complainants, please, let us settle this,” he said.

His arrest ended the more than a week-long manhunt conducted by the police, which distributed his pictures to all hotels and motels in Metro Manila to alert their staff about his modus operandi.

This was after the management of Victoria Court on Cuneta Avenue, Pasay City, sought help from authorities on June 11 when Saca, who was identified through a United States-issued driver’s license, left the establishment without paying his bill, which totaled more than P10,000.

He also reportedly stole a TV set and hit with his Volvo an employee who tried to stop him from escaping by putting up a steel barrier.

Charges of estafa, assault and theft were subsequently filed against him in the Pasay City Prosecutor’s Office last week.

On Wednesday morning, the Makati police received a tip from the security personnel of St. Giles that the man being sought by authorities had checked into the establishment on Monday night.

“He allegedly used a credit card that had no funds upon checking in. He was about to leave the premises when the hotel security called us,” Lukban said.

Following an investigation after Saca’s arrest, the police found out that he had victimized other hotels.

They said that in the first week of May, he checked into The Peninsula Manila in Makati City under the name “Mark Roche.” He left without paying and even stole a laptop worth P100,000, according to the footage taken by one of the hotel’s closed circuit television cameras.

In another incident, Saca, this time using the name “Jefferson Jason Gonzaga,” tried to check into another posh hotel, the Mandarin Oriental, although he left after the staff asked him for a cash deposit.

Before the incident at the Victoria Court in Pasay City, Saca had gone to another branch of the motel in Malate, Manila, where he took two plasma TV sets and a computer before he left without paying his bill, the police said.

“We will file charges of estafa and resistance of arrest [against him in] the Makati Prosecutor’s Office. This is apart from the cases he is facing in Pasay and Manila,” Lukban said.

Saca admitted that on several occasions, he checked out of motels and hotels without paying. “But those appliances were not stolen by me. I have not touched a single thing,” he said.

He added: “I am not denying it… I did not pay those bills but I promised I would return to settle them.”

Saca claimed that he was not alone whenever he checked in and it was the “bad guys” who were with him who stole the things he was accused of taking.

He said that the Volvo car he used as a getaway vehicle was not his although he was “in the process of purchasing it.”

Senior Superintendent Rodolfo Llorca, Pasay police chief, said the white Volvo with plate number UPZ 452 was found in a garage at Hotel Sogo on Wood Street in Pasay on Tuesday.

Llorca added that Saca checked into the motel but he paid his bill before he checked out. He left the car behind, however, after telling the attendants that it had run out of gas.

The management of the motel informed the police when the man failed to come back to claim his car.