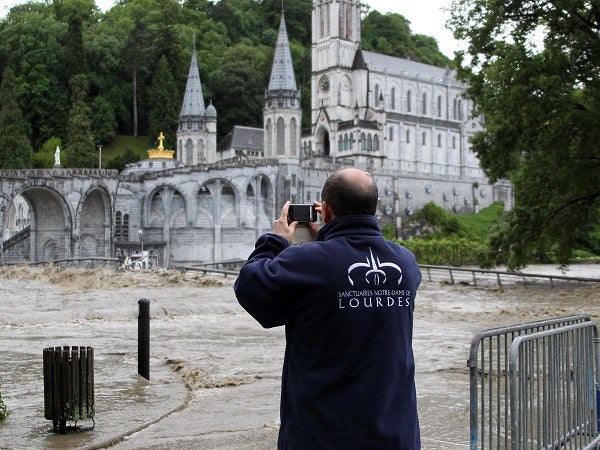 A guardian of Lourdes sanctuary takes photo of Lourdes sanctuary flooding in Lourdes, southwestern France, Tuesday, June 18, 2013. French rescue services and police are evacuating hundreds of pilgrims from hotels threatened by floodwaters from a rain-swollen river in the Roman Catholic shrine town of Lourdes. AP/Bob Edme

TOULOUSE — Flash floods in southwestern France killed an elderly woman as the inundated grotto at the Roman Catholic pilgrimage site of Lourdes remained closed for a second day on Wednesday.

The woman in her 70s was washed away overnight by the floodwaters after getting out of her submerged car at Saint Beat near Lourdes, the local prefecture said in a statement. Her husband was rescued by firefighters.

About 2,000 people in the region were evacuated, some of them by helicopter. A bridge at Saint-Laurent-de-Neste was washed away by a tributary of the Garonne river.

The shrine at Lourdes, where the Virgin Mary reportedly appeared to a peasant girl in 1858 and whose water many believe has curative powers, remained closed on Wednesday.

Tourists in the town were relocated from hotels bordering the Gave de Pau to an area on higher ground.

On Tuesday afternoon, there was already 1.40 meters (4.5 feet) of water in the Lourdes cave and the Gave de Pau river nearby was 3.50 metres above its normal level.

The French interior and ecology ministers were due to visit Lourdes later Wednesday to assess the damage in the area, home to 22 shrines.

In 2012, the Lourdes shrines were closed after flash floods that caused hundreds of thousands of euros in damage.

But rivers in the region were now gradually returning to their normal levels.

“The waters are abating. We have seen a steady decrease through the night,” an official from the prefecture of the Haute-Pyrenees region told AFP.

Lourdes attracts millions of visitors every year. The Catholic church recognizes 68 miracles linked to it and many disabled or sick people go there to pray for a cure.