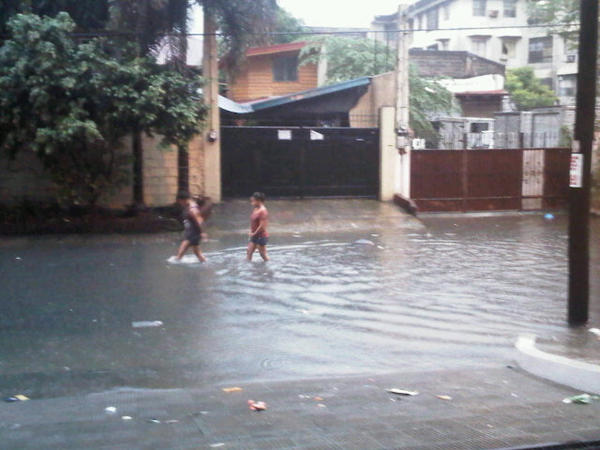 How do you solve flooding in Metro Manila?

An ambitious project calls for a massive, multiyear flood-control program, but would cost P600 billion, according to a bill filed in the 15th Congress.

But the bill appropriating the amount to the Department of Public Works and Highways (DPWH) had been stranded at the committee level since August 2012. Four months later, its principal author, Bohol Rep. Erico Aumentado, passed away.

Under House Bill No. 6469, the DPWH would craft a “long-term flood-control program,” not only for Metro Manila but also for Central Luzon and Calabarzon (Cavite, Laguna, Batangas, Rizal and Quezon) region.

“It is now time and opportune for the Congress of the Philippines to enact a public works flood control law to be implemented on a multiyear basis up to the year 2040,” the late Aumentado wrote in his bill’s explanatory note.

The master plan would require an initial amount of P352 billion for the “preparatory task of the design and implementation of the priority projects.”

Last year, a DPWH official mentioned a similar amount for a comprehensive flood control project that was to be completed by 2035, or five years earlier than the Aumentado proposal.

HB 6469 would set aside P600 billion for the DPWH through a “multiyear appropriation.” Funding could also be sourced from official development assistance (ODA) coming from countries like the United States and Canada or the European Union.

Aumentado had also suggested that the government secure funding from lending institutions such as the World Bank and the Asian Development Bank.

The proposed master plan would cover 11 priority projects, among them the Marikina Large Dam, “ring-road dike on the rim of Laguna de Bay, embankments and catch basins in the Marikina watershed, and an 8-kilometer dike and pumping stations in Caloocan, Malabon, Navotas and Valenzuela” cities.

Also to be included in the plan are drainage improvements in the “Manila core area” and improvements of the Tullahan River in Malabon and the river that stretches along Valenzuela, Obando and Meycauayan City in Bulacan.