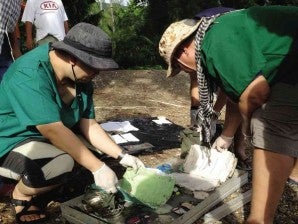 FORENSICS inspect items recovered from the shipwreck of MV Princess of the Stars, signs that hundreds of bodies are still trapped in the ill-fated ship. The salvaging of the sunken ship continues after five years in San Fernando, Romblon, in Sibuyan Island. PHOTO BY MARICAR CINCO

How many times has he been to Sibuyan Island in Romblon? Delfin Clemente has lost count. The 53-year-old man has been there since Day One of the search operations and witnessed how the death toll grew. The hull of a capsized ship, bobbing out of the waters, had drawn international attention until it was finally towed away.

More than 800 passengers and crew of MV Princess of the Stars died when it sank at the height of Typhoon “Frank” on June 21, 2008. It was considered to be one of the Philippines’ worst sea tragedies.

“I was supposed to be on that ship but for no reason I decided to have my ticket rebooked for a later date,” Clemente said. His sister, Gloria Rabe, and her husband Renato, and their friend, Paul Bermudez, were among the fatalities.

“If only I were there, maybe I could have done something for her,” Clemente said.

Only 52 people have survived. Around 300 bodies were recovered while more than 400 were still trapped in the shipwreck.

Even after he suffered a stroke in January, Clemente still returned to San Fernando town in Romblon, with nothing but a change of clothes, a medicine kit and hopes that divers would one day find the remains of his brother-in-law.

“I cannot stop until I find Renato’s. I promised Gloria I will find him so they can still be together,” he said. Gloria’s body was recovered in 2008 off the beach in Donsol, Sorsogon. Her face was barely recognizable. 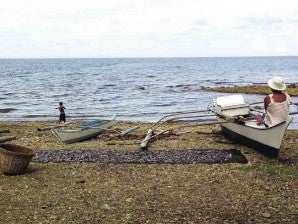 A WOMAN looks out at the calm sea while drying up her fresh catch of anchovies. The hull of a sunken ship used to be visible from the shore of Barangay (village) Taclobo. What lies under water, though, is the remainder of the shipwreck where hundreds of bodies are believed to be still trapped. PHOTO BY MARICAR CINCO

Clemente, a van driver in Manila, stays in fishermen’s huts whenever he is on the island. He buys fish from their catch; when there’s none, he gets by with instant noodles from sari-sari stores. His only pastime is to watch the men play cards.

By the time he runs out of money, Clemente travels back to Manila and work till he earns enough to survive several months again on the island.

“My wife has to let me come back here or I tell her I will have no other choice but leave her,” Clemente said. His children, who now have their own families, could not come along.

Estella Jeli, 36, a resident of Imus City in Cavite, has a similar story. She is looking for her two younger siblings, Jonil and Jackie Laurel, who were 17 and 7, at the time of the sinking.

Her parents and five siblings boarded the ship to Cebu where the family had planned to build a house and settle. “The rest of us were supposed to follow them once the house is ready,” Jeli said.

The bodies of her father and two siblings were found in November 2008, and those of her mother and 9-year-old brother in April 2009.

“I still have it on my mind that one day they will call out: ‘Ate, we’re here already.’”

“It still feels like it just happened yesterday,” Jeli said.

The retrieval of the shipwreck could take three to five more years to complete due to erratic weather conditions, according to Vener Balasamo, project engineer of the salvaging company Hi-cap Metal Trading.

But Jeli said she did not mind waiting even if she had to borrow money for her fare. She does not have a job while her husband works as a driver in Cavite.

Clemente said he only wants to give his loved ones a decent burial. “I think anyone in my place would do the same.” “Even if I have to beg for alms in Quiapo just so I could find him and bring him back home,” he said.