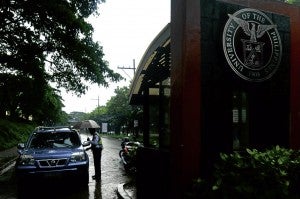 Motorists are asked for identification cards when passing through one of the UP gates. PHOTO BY JOHANN GUASCH

MANILA, Philippines – A female law student was robbed inside a taxi cab while on her way to the University of the Philippines in Diliman, Quezon City Monday night.

The complainant lost her Apple Macbook Air, iPhone5 and iPad Mini as well as P1,200 cash to four robbers, one of whom was the taxi driver.

The complainant told police that two of the robbers hid themselves in the vehicle while the fourth man boarded the cab minutes into the ride.

“It was the driver who pointed the gun at the victim and declared the heist,” said Police Officer 2 Romeo Nino II, case investigator.

The complainant said she was in a hurry to attend a training seminar in UP campus that night.

She recalled it was raining hard when she flagged down the white taxi at around 7:30 p.m., in front of the Savemore supermarket on Katipunan Road. She could not, however, remember the make of the vehicle.

She asked the driver to bring her to UP but the driver, instead of going straight to the destination, suddenly made a turn.

Based on the victim’s account, Nino said two of the robbers hid in the vehicle–one apparently crouched at the front seat and the other beneath the rear shelf of the taxi cab’s boot.

The suspect who hid under the rear shelf moved to the back seat beside the victim and grabbed her belongings.

Minutes later, another man wearing a blue raincoat also boarded the taxi and sat on the other side of the victim.

The complainant  said she was released somewhere in Fairview, Quezon City, with the man in the blue raincoat warning her that she would get hurt if she looked back at them.