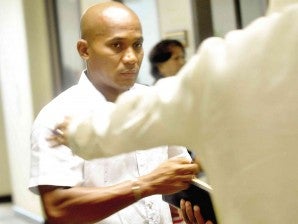 Allan Cañete Bantiles, the father of a Colegio San Agustin student who was accused of pointing a gun at his son’s classmate following a fist fight between the two boys, appears in court to answer the charges against him. RICHARD A. REYES

The man accused of pointing a gun at a high school student inside an exclusive school in Makati City pleaded not guilty during his arraignment on a charge of grave threat Monday afternoon.

Accompanied by his lawyer Richard Nethercott, Allan Cañete Bantiles arrived an hour late for his arraignment set at 1:30 p.m. by Judge Henry Laron of the Makati Metropolitan Trial Court’s Branch 65.

The case against Bantiles, said to be a real estate contractor and resident of Vista Real Classica in Quezon City, was filed against him by Jesus Manuel Garcia, a former student of Colegio San Agustin.

Garcia earlier said that on Aug. 30 last year, Bantiles slapped him, shook his shoulders and pointed a loaded gun at his forehead.

He added that the accused also threatened to shoot him and told him: “Do you want me to shoot you? I can shoot you.”

Before the gun-toting incident, Garcia admitted that he punched in the face Bantiles’ son who was his classmate then. His action, the complainant claimed, was in response to the repeated bullying he experienced at the hands of the accused’s son.

Since the bullying incident, Garcia has been transferred by his parents to another school.

“We know what Bantiles is capable of since he was able to do this and still deny it in front of witnesses,” Toni, the complainant’s mother, told reporters. 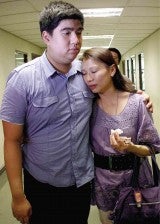 Bantiles and his lawyer evaded cameramen and refused to grant interviews to media after the arraignment.

The two parties are scheduled to appear at the start of mediation hearings on June 21.

“As required under the rules, the case needs to undergo a mediation hearing before a full trial,” Garcia’s counsel, Dominic Balane, said.

Although a mediation hopes to arrive at a settlement between the two parties, Balane said Garcia and his family had no intention of entering into a settlement. “We hope to be able to present all the evidence in a trial,” he added.

Balane said a person convicted of grave threat must face six months in prison and pay a fine of P500. The initial charges of attempted murder, slander and slander by deed filed against Bantiles were downgraded to grave threat by the Makati City Prosecutor’s Office.

A month after the gun-toting incident, the Philippine National Police revoked the firearm permits given to Bantiles for his two guns.