In Makati, the entire stretch of J.P. Rizal Street was a virtual parking lot when rain plunged several intersections into traffic chaos.

As traffic did not budge an inch for hours, many jeepney and taxi passengers got off and walked their way home braving the soaking rain.

On Edsa, motorists and commuters got bogged down in gridlock. At the elevated Guadalupe MRT station, people saw a river of vehicles from Orense Street to Boni Avenue, Mandaluyong City hardly moving. 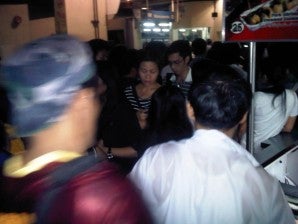 “Edsa was a sea of red tail lights,” said an MRT passenger queuing to get on a train.

“Paulit-ulit na lang ito (It is happening all over again),” said another passenger.

The rush-hour rain also forced many people to take the MRT. Security personnel and train supervisors had their hands full maintaining order at overcrowded MRT stations.

At the Magallanes, Ayala, Buendia and Guadalupe stations, the long lines of passengers snaking down the stairs were a common sight, radio reports said.

As of 11 p.m., the Metropolitan Manila Development Authority said that traffic from White Plains, Quezon City to Puyat Avenue (Buendia), Makati was heavy.

Traffic from Market Market in Taguig to Libis flyover in Quezon City was also heavy as of 11:21 p.m., the MMDA added.

Meanwhile, traffic from P.Tuazon to Greenmeadows was also heavy as of 10:54 p.m., the MMDA said.