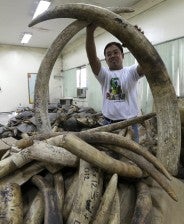 MANILA, Philippines–A party-list lawmaker wants the Department of Environment and Natural Resources to stop its decision to destroy seized elephant ivory tusks, amounting to P420 million, saying these items could be preserved and used for educational purposes.

Ako Bicol Rep. Rodel Batocabe said keeping the ivory tusks would give students in the country an opportunity to see and study these rare items up close.

“Our children might not be able to see and touch an ivory tusk their whole life, much less a live elephant. We have ivory tusks lying around DENR premises. Why destroy them when they could teach so much to future generations?” Batocabe said in a statement.

The DENR is scheduled to crush the five tons of confiscated elephant tusks using road rollers on June 21.

Environment Secretary Ramon Paje earlier said the destruction of the items illegally brought into the country was intended to send the message that the Philippines would not tolerate illegal wildlife trade.

This is in line with the Philippines’ adherence to the Convention on International Trade in Endangered Species (CITES) of flora and fauna, which prohibits ivory trade in order to stem the decimation of the elephant population in Africa.

Batocabe, vice chair of the House Committee on Environment and Natural Resources, said the ivory tusks could be donated to schools, universities, museums, or non-government organizations.

These could be used to teach the public about caring for endangered animals and about the dangers of ivory trade to the welfare of these animals, he said.

“Schools and NGOs will have good use for it to teach the public, especially the young generations, why ivory trade is banned,” he said.

“Our museums and NGOs will be able to use these tusks to strengthen the world campaign against international ivory trade,” he added.

According to the lawmaker, ivory tusks should not be likened to other contraband such as illegal drugs and pirated CDs, since the latter bring no benefit to the public and could not be used for educational purposes.

“These are priceless treasures that will be put to waste if we destroy them,” he said.

The DENR earlier planned to subject some of the seized tusks to a “ceremonial burning,” but this plan was halted after clean air advocates contended that this could send the message to the public that open burning was acceptable.