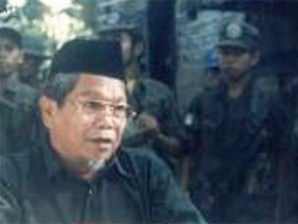 MANILA, Philippines – The Moro Islamic Liberation Front on Monday said they will discuss changes to the wealth-sharing annex being sought by the government, but added that they will most likely reject them.

He said he will preside over the discussion anytime until Wednesday.

(It has been signed; it has been initialled and why change it? It has also been fully discussed.)

The other annexes still unresolved in the Framework Agreement on the Bangsamoro are wealth and power-sharing, and “normalization.”

The Armed Forces of the Philippines, meanwhile, said that they remain supportive of the peace talks and they are confident that the disagreements are only “small stumbling blocks” that can be talked about.

After signing the preliminary Framework Agreement on the Bangsamoro (FAB) last Oct. 15, 2012, the parties were expected to have concluded a comprehensive agreement two months later.

That would have happened if the four annexes to the FAB dealing on power-sharing, wealth-sharing, normalization, and transitional arrangements and modalities (TAM) were completed.

So far, only TAM was done. The one for wealth-sharing was initialed last February although government has sought some more changes to it; and consensus on two power-sharing

Under the TAM, transition from ARMM to Bangsamoro should take place by 2015, culminating with the assumption into office of a full set of elected officials by July 1, 2016.

A Bangsamoro Basic Law, which Congress has to enact and to be ratified by the affected population, will be the principal instrument to carry out the transition.

Malaysian facilitator Dato Tengku Ab’ Ghafar Bin Tengku Mohamed traveled to the country early this month to do separate backroom talks with the parties to keep the talks going.

Within the slack period since April, the peace panels agreed to exchange notes to move the consensus-building exercise.