Violence flares as Turkey PM cracks down on protests 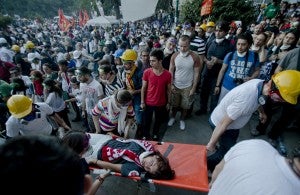 A girl is evacuated on a stretcher after riot police flooded the Gazi Park with tear gas during clashes at the Taksim Square in Istanbul Tuesday, June 11, 2013. Riot police are re-entering Istanbul’s Taksim Square after defiant protesters swarmed back in by the thousands. Massive plumes of tear gas billowed upward, and police fired water cannons Tuesday night. AP PHOTO/VADIM GHIRDA

ISTANBUL—Thousands of demonstrators squared off against riot police firing tear gas in an Istanbul square Tuesday after Turkish leader Recep Tayyip Erdogan warned he had “no more tolerance” for the protests against his Islamic-rooted government.

Acrid clouds of smoke filled Taksim Square, sending people scrambling, though huge crowds returned within minutes chanting: “We stand together or we fall together!” in a fresh escalation of 12 days of nationwide unrest.

Police returned to Taksim in the early morning for the first time since pulling out more than a week ago. Throughout the day, they fought hours-long battles with groups of demonstrators, some of whom hurled stones, fireworks and Molotov cocktails.

As evening fell, officers lined up along the eastern side of the square and looked on as demonstrators flooded the area for a 12th night, before firing tear gas that was met with fireworks from the protesters.

In the capital Ankara, which has seen several nights of violence, crowds also took to the streets.

The early-morning police intervention in Taksim Square surprised protesters, many of whom were still dozing in nearby Gezi Park, because it came just hours after Prime Minister Erdogan said he would meet with protest leaders on Wednesday, his first major concession since the trouble began.

But the premier made no mention of the olive branch Tuesday and resumed his tough stance against the demonstrators who have put up the biggest challenge yet to his decade-long rule.

“This episode is now over. We won’t show any more tolerance,” the premier told cheering lawmakers of his Justice and Development Party (AKP) in a speech broadcast live on television.

“Can you believe that? They attack Taksim, gas us in the morning just after proposing talks with us?” said 23-year-old Yilmaz.

“We won’t abandon Gezi,” he vowed. “I am not afraid of their water cannon, it’ll be my first shower in three days.”

The nationwide unrest first erupted after police cracked down heavily on May 31 on a campaign to save Gezi Park from redevelopment.

The trouble spiraled into mass displays of anger against Erdogan, who is seen as increasingly authoritarian, tarnishing Turkey’s image as a model of Islamic democracy.

Erdogan said on Tuesday that four people, including a policeman, had died in the unrest. Nearly 5,000 people have been injured.

In a rousing speech to lawmakers, Erdogan urged “sincere” protesters in Gezi Park to pull back, warning that their environmental campaign was being hijacked by “an illegal uprising against the rule of democracy.”

In a symbolic gesture, police removed anti-Erdogan banners from a building overlooking Taksim and replaced them with a single Turkish flag and a large portrait of Mustafa Kemal Ataturk, the father of modern Turkey, whose image has also been adopted by the protesters.

Istanbul governor Huseyin Avni Mutlu sought to justify the intervention, saying the protesters’ takeover of Taksim Square “tarnished the country’s image before the eyes of the world,” and assured demonstrators police would not storm Gezi Park.

But the 59-year-old, in power since 2002, remains the country’s most popular politician. His AKP has won three elections in a row and took nearly half the vote in 2011, having presided over strong economic growth.

The premier has urged loyalists to respond to the demonstrators by voting for the AKP in local polls next year.

The first campaign rallies will be staged in Ankara and Istanbul next weekend and are expected to gather tens of thousands of party faithful.

More than 70 lawyers were arrested in Istanbul after gathering at a city courthouse to object to the police operation, the Contemporary Lawyers’ Association said.

Protesters said Tuesday’s crackdown had made them lose faith in the prospect of dialogue with Erdogan.

Taksim Solidarity, the core group behind the campaign to save Gezi Park, accused the premier of “polarizing” the public.

Turkey, a country of 76 million at the crossroads of East and West, is a key strategic partner in the region for the United States and other Western allies. Many of them have criticized Erdogan’s handling of the crisis.—Ceren Kumova