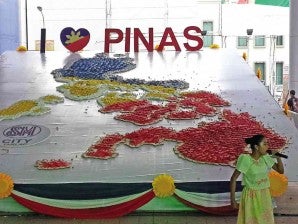 A MAP of the Philippines made entirely of slippers is on display at a mall in Tarlac City as part of the commemoration of the 115th Philippine Independence Day. JO MARTINEZ-CLEMENTE

The easiest—and maybe the cheapest—way of displaying a giant Philippine map may be to cut it out from a Styrofoam board, mount it on plywood, and paint it.

But the marketing group of a shopping mall in Rosales, Pangasinan, wants something out of the ordinary, especially because it is going to be the centerpiece of the mall’s display for today’s 115th Independence Day celebrations.

Why not build a giant Philippine map made of oyster shells?

“This is basically our tribute to the oyster and aquaculture industry of Pangasinan,” says Roy Ragudos, marketing manager of SM City Rosales.

Aside from bangus (milkfish), oysters are grown abundantly in Dagupan City and in western Pangasinan towns.

“This is also part of our commitment to promote local industry and Pangasinan’s natural resources and attractions,” Ragudos says.

But more than that, he says, the oyster shell map was their way of providing a sense of history to shoppers.

“Last year, we depicted the first flag-hoisting at Kawit, Cavite. We wanted our shoppers to be in that balcony so that they would know how it felt to be there, to be free, waving the Philippine flag,” he says.

The map, which will be unveiled today as highlight of the mall’s Independence Day celebration, measures 4.6 meters high (15 feet) and 2.2 meters wide (7 feet).

“In order to create a visual effect, we painted it, adopting the colors of the flag,” Ragudos says.

A white dove, also made of oyster shells, hovers at the top of the vertical display.

Eight sacks of oyster shells bought from Dagupan were assembled by a local craftsman using a glue gun and cement on plywood cut-outs mounted on a metal frame.

“But it’s not flat. It’s some sort of three-dimensional to make it bulkier and to provide texture,” Ragudos says.

The map will be displayed at the mall’s main covered walk until June 30.

In Tarlac, a giant Philippine map made of rubber slippers was unveiled at SM City in Tarlac City on Monday for the Independence Day celebrations.

Ulanday says the slippers were donated by residents and SM customers under the mall’s “Tsinelas ni Juan para sa Batang Pinoy” project. The slippers will be given to students of San Jose Elementary School after the display.

The map measures 12.19 meters by 7.92 meters (40 feet by 26 feet) and is made up of thousands of pairs of rubber slippers in red, white, blue and yellow.  With a report from Jo Martinez-Clemente in Tarlac City