How relevant is the Philippine flag today? 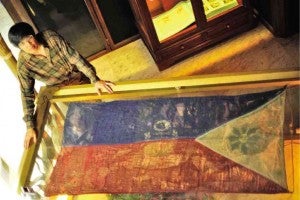 EMILIO Aguinaldo Suntay III, great grandson of the late Gen. Emilio Aguinaldo, urges the public to revisit the stories of the country’s heroes to reignite their patriotism. The Suntay family has custody of what it believes to be the original flag (shown above) unfurled 115 years ago in Kawit, Cavite. EV ESPIRITU

The great grandson of the late Gen. Emilio Aguinaldo, the president of the First Philippine Republic, has a challenge for the Internet savvy, globally cultured and perceptive Filipino generation: Do an “Indiana Jones” and seek out everything there is to know about Philippine heroes.

For example, Deodato Arellano, the first president of the revolutionary group, Kataastaasan Kagalang-galangang Katipunan ng mga Anak ng Bayan (KKK), died in Cordillera and is buried in La Trinidad, Benguet, but few, if any, know where that tomb is located, says Emilio Aguinaldo Suntay III.

Finding Arellano’s tomb and setting up a marker so the public finally gets an inkling as to who he was in history is a significant undertaking, Suntay says.

The country’s sovereignty is threatened by its territorial and diplomatic issues with China and Taiwan, and rediscovering the stories of these heroes, as well as the relics they left behind, should help remind the people why Filipinos should strive to fight as the country celebrates the 115th Philippine Independence Day, he says.

“We were the first Iraq and the first Vietnam when Spain and America colonized the Philippines,” he says. “But we fought them off [strengthened by our] patriotism.”

Suntay’s family has custody of what it believes to be the original Philippine flag that Aguinaldo raised in Kawit, Cavite, during the inauguration of Philippine independence 115 years ago.

The flag was first unfurled in combat at the Battle of Alapan in Cavite on May 28, 1898, which was the first military victory under Aguinaldo’s command when he returned from his Hong Kong exile.

The fighting expanded to the Battle of Imus, “culminating in a victory on May 31 for the Philippine forces,” Suntay says.

“These details are important because just as we now fight off challenges from China and other Asian nations which lay claim over portions of Philippine marine territory, the Filipino revolutionaries were fighting the same immense odds against the Spanish empire, and again against the United States which was on the road to becoming a superpower,” he says.

“How relevant is [the flag] today? It is relevant in the sense that we all know China has already taken over some of our islands. We all know Taiwan is so angry over the shooting of its fisherman… The odds are overwhelming. But just as 115 years ago, the odds were also [huge], but we triumphed because of our love of country and our fellowmen,” he says.

“We have battled two colonial powers [beginning with] the Spanish colonial [government] which was responsible for conquering Latin America—for erasing the Incas and Aztecs from history,” he says. “A closer look at our military history is we have triumphed and the flag is witness to that.”

“Little does the Philippines know that aside from [dying while defending] Tirad Pass [during the Philippine-American War], Gregorio del Pilar was an esteemed general who defeated Spanish forces at the age of 21 or 22. [He fought off the] US Cavalry using a mere infantry. [That feat] befuddles us,” Suntay says.

The Philippines does not celebrate this feat because “it’s an American defeat,” he says. “We have places in Fort Bonifacio that still honor American President William McKinley, the Republican president who was responsible for colonizing the Philippines,” he says.

Aguinaldo’s flag spent most of its battle life in northern Luzon, Suntay says. The phrase “Fuerzas Expedicionarias del Norte de Luzon” runs across one side of the original flag, stitched with gold silk thread, while the words “Libertad” and “Justicia” are stitched on the other side.

The first flag, a bundle of fraying silk fabric that was found tucked under Aguinaldo’s deathbed by his daughter, Cristina, Suntay’s grandmother, is secured in a family museum in Baguio City.

It may last only for 50 more years because technology cannot keep it preserved in perpetuity, Suntay says.

The image of the sun on the flag bears a face, a feature that lends credence to the family’s claim that it is the authentic flag.