Kabang expected back in Zamboanga by Saturday 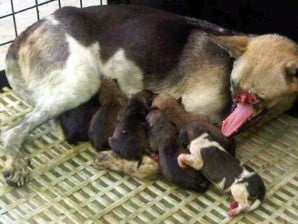 ZAMBOANGA CITY – Kabang, the heroic Philippine mongrel, is finally coming home on Friday after eight months of treatment in the United States for parasites, a form of cancer and an operation to close a wound the dog suffered in an accident that caused her the loss of her upper snout in 2011.

Kabang’s trip back home was decided upon after animal doctors at the Veterinary and Medical Teaching Hospital at the University of California-Davis released her to her personal veterinarian, Dr. Anton Lim.

Mona Consunji of the Animal Welfare Coalition said Kabang was expected to arrive in Manila via Philippine Airlines around 6 a.m. on Friday and will be immediately presented to journalists.

“She will be brought to the Animal House Jupiter later in the day and the next day, June 8, she will be flying to Zamboanga,” Consunji told the Philippine Daily Inquirer in a telephone interview.

Dr. Mario Arriola, Zamboanga City’s veterinarian, said Kabang and her team of veterinarians were expected to arrive here late Saturday afternoon or in the evening.

He said a motorcade has been scheduled for Sunday that will take Kabang to the Santa Maria Open Park “to meet other dogs.”

Arriola said Kabang’s trip to the park was arranged to allow pet owners to see the dog up close because they had previously seen her only on television.

“Kabang, the Ambassador of Dogwill, will be provided special time to do that,” Arriola said.

As to where Kabang will finally stay here, he said, they would wait Lim to make the announcement.

Rudy Bunggal, Kabang’s master, has signed a document expressing disinterest in taking the dog back after her US sojourn.

Bunggal said he was so poor that taking care of the dog would be an added burden, especially because of her delicate condition.

In 2011 Kabang, then aged two and pregnant, became a hero in the Philippines after running in the path of a speeding motorcycle in what Bunggal claimed was a deliberate act to save his daughter and a niece, who were crossing a busy road.

Kabang’s heroism tickled the interest of so many people across the globe that the Care for Kabang Foundation managed to raise $27,000 to spend on her medical treatment in the US.

Bunggal’s wife, Christina, said the family was happy and excited to learn that Kabang was finally coming home from the US. But she said they were also sad because Kabang might not have the chance to be with her surviving pup, which was named JR.

“He suffers from skin allergies and bringing him near his mother might not be good,” Christina said.

Kabang delivered six puppies last year before she was flown to the US but five of them did not survive.

In the US, the heroic dog was first treated for heartworm disease and an infectious cancer known as “transmissible venereal tumor” before she was made to undergo surgery to close the open wound brought by the mangling of her upper snout, which got caught in the spokes of the motorcycle’s front wheel in the 2011 accident.

The UC Davis website hinted that Kabang’s treatment was elaborate when it said that “a team of UC Davis veterinarians — specializing in oncology; infectious diseases; dental, oral and soft-tissue surgery; internal medicine; and outpatient care — was quickly formed to coordinate Kabang’s multitreatment care.”

“Because of the nature of Kabang’s health problems, each treatment had to be successfully completed before the next began,” the UC Davis website said.

“We were able to treat all of the complications that arose with the best specialists available,” Prof. Frank Verstraete, chief of the dentistry and oral surgery service at the School of Veterinary Medicine’s William R. Pritchard Veterinary Medical Teaching Hospital, said.

On March 5, Verstraete and Boaz Arzi performed oral surgery to remove two of the dog’s upper teeth and reconstruct one eyelid that had been damaged by the motorcycle.

They then prepared Kabang for maxillofacial procedure to correct her facial injury.

The March 27 surgery, which lasted nearly five hours, led to the closure of Kabang’s facial wound with skin flaps brought forward from the top and sides of her head.

Verstraete and Arzi then worked with William Culp, a veterinary soft-tissue surgeon at UC Davis, to reconstruct nasal openings and insert stents in these passages to allow two new permanent nostrils to form.

“The surgery was long but went just as planned, in large part due to the collaborative nature of Kabang’s veterinary team,” Arzi said.

Read Next
Indian police arrest 3 for raping American woman
EDITORS' PICK
Kai Sotto, Angelo Kouame lead Gilas final 12 vs South Korea
Palace: Duterte unfazed by ICC probe on drug war killings
Palace says ICC prosecutor report is ‘fantastical,’ based on ‘hearsay’
Smart brings KCON:TACT especially 4U to subscribers from June 19 to 27
Synology NAS: A photo storage and multimedia server for your home
Defending himself before ICC ‘logical thing to do’ for Duterte, says Drilon
MOST READ
Palace says ICC prosecutor report is ‘fantastical,’ based on ‘hearsay’
Murder suspect tries to sell car with dead GF in backseat
Duterte to meet with Sotto, Velasco to discuss fate of BARMM polls
Opposition ‘must go beyond anti-Duterte platform’ in 2022 polls – Drilon
Don't miss out on the latest news and information.