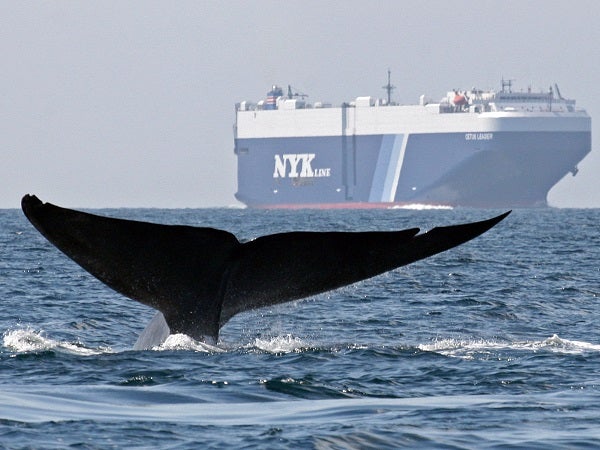 In this Aug. 14, 2008 file photo provided by John Calambokidis, a blue whale is shown near a cargo ship in the Santa Barbara Channel off the California coast. AP FILE PHOTO/Cascadia Research, John Calambokidis

The whaling, conducted in the name of “scientific research”, took place from April 18 to June 3 and netted 17 male and 17 female minke. The catch is the lowest since Tokyo started the program in 2003, the agency said.

“The weather was very bad this year, often with thick fog or very strong wind,” said an agency official.

It says whales are studied as part of a bid by Japan’s whaling research institute to prove their populations can sustain commercial whaling.

Many of the whales this Spring were slightly smaller than last year, the official said.

Stomach samples from 22 of the creatures caught in Sendai Bay showed their diet was dominated by young sand eels, rather than mature sand eels as in the past, the group said, according to Kyodo News.

The whaling mission in the Southern Ocean this year also logged a “record low” catch of the mammals, with the government blaming “unforgivable sabotage” by activists.

Activists charge Tokyo’s “research whaling” is cover for commercial whaling that is banned under an international agreement.