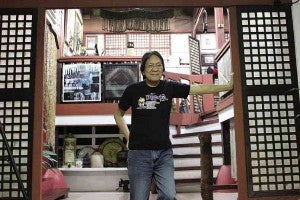 It was one fine day at the height of martial law in the ’70s when Junyee stepped out of his dormitory at the University of the Philippines (UP) in Diliman and burned all his stuff.

He did not own much, but among those smoldered were his prized collection of art books, diploma and even love letters. He kept only three pairs of pants, a few shirts, a toothbrush, and a pair of slippers as he set off breaking new ground for installation art.

“You can (always) come up with a new style, a new approach, but a new school of thought is different (and) that’s not easy to do,” said Junyee, whose name has become synonymous to Philippine installation art.

For his pioneering work, Junyee or Luis E. Yee Jr. received more than a dozen nominations for the Order of National Artists, the highest recognition for an artist’s contribution to the development of Philippine art.

“To pioneer something is to change the landscape of arts. The idea is to open the door for other artists, the younger generations, to follow,” he said.

Junyee, a native of Cabadbaran town in Agusan del Norte, recalled a life as a “classic story” of an artist.

His father, a Chinese businessman, wanted him to run the family’s hotel and restaurant business, while his mother, a Filipino, wanted him to become a doctor or a priest.

“My father said I would starve (if I became an artist). My parents argued so much about it so to solve everything, I ran away from home,” he said.

Junyee was 17 when he first went to Cebu to study at San Carlos University, only to find out that it did not offer fine arts. He moved to Quezon City and, through scholarships, entered UP.

“It wasn’t easy because I had a comfortable life. I even grew up with a yaya (nanny),” he said.

As his savings were running out, Junyee took on jobs as a house boy, a helper in a hardware store, and even a seller of local, cheap wine.

He attended art classes, using scrap wood he found around the campus for his sculptures and scratch paper given by classmates as he could not afford fresh sheets for his sketches.

But those “miserable years” did not stop Junyee from joining and winning art competitions, beating even his professors and famed sculptors at that time.

The experience, he said, “strengthened my resolve, sharpened my instinct and turned a pampered Catholic school boy to a street smart.”

Junyee was already making a name in sculpting when he took a shot at a whole new genre—installation art.

His first outdoor installation, a one-man show he called “Balag,” was set up in UP Diliman in 1970.

“No one paid attention to it. Maybe, at that time, people didn’t understand (installation art) yet,” he said.

This was followed by several other exhibitions that featured nontraditional wood and indigenous art materials, which won local and international awards.

Not for fame, glory

Junyee and his wife, UP Los Baños professor Dr. Marites Yee, built their house in the university town at the foot of Mt. Makiling. He keeps a small studio at the back of their house and a larger one in the lush mountain.

Among Junyee’s legacies is Sining Makiling, which became UP’s first art gallery that paved the way for art festivals in Laguna and elsewhere in the country.

Internationally, Junyee was again recognized in 2007 for “Open Doors,” the seven-meter-high, geometric monument he designed for the Israel Holocaust Memorial.

Junyee could have made a fortune from commissioned works, but this artist, who up to now owns only three pairs of pants and not a single piece of jewelry, stressed that he is “not after fame or fortune.”

He’s not being frugal, he said, if he went to artists’ functions in faded jeans and shirt, but if he were a painting, “I’m a minimalist.”

Junyee said he could never brag about his talents “which were freely given to me, but what I can brag about is I was able to hone them.”