Enrile: My heart bled for Jack 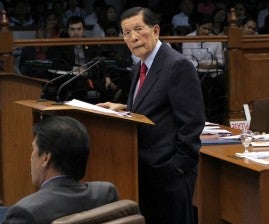 MANILA, Philippines — “My heart bled for him,” so said resigned Senate President Juan Ponce Enrile of his son, Jack, who ran and lost in the May 13 senatorial elections.

Enrile attributed his son’s defeat to all accusations hurled  against him, including the alleged misuse of Senate  funds under  his leadership.

The “enmity” that marked the ending of sessions days  last January and February, he said,  was carried well into the campaign.

“A first senatorial run is a tough hurdle in itself. But Jack knew from the beginning that the fight would be many times more difficult for him — this, by the fact alone that he is the son of Juan Ponce Enrile,”  Enrile   said in  his privilege speech on Wednesday  where he announced this  irrevocable resignation.

“Yet Jack forged on, plodded and toiled on his own. He braved the storm and took on all the brickbats and accusations, both old and new. He squarely faced the issues against him and submitted himself to the judgment of the electorate without uttering a word against his detractors.”

“As a father, I endured in silence the pain of seeing my son suffer because of me. He carried on his shoulders the weight of all the mud thrown against me. As I stayed and watched quietly by the side lines, my heart bled for him,”  Enrile added.

In spite of all these, he said he was “deeply touched” to hear his son say that he remained his hero.”

“I was deeply touched by that, and I could not ask for anything more from my son. He has truly made me even more proud to be his Dad,” he said.

Enrile lamented that the “baseless” and “malicious” accusations hurled at him  had never been  resolved as it was quickly overtaken by the campaign fever.

The truth or falsity of the accusation, he said, were “lost and muddled in the  wild frenzy of election rhetoric and  propaganda.”

“I took all of these as part of the burden of leadership. As your leader, I never shirked from the responsibility to defend my actions and decisions, the honor of the Senate and that of my colleagues,” he said.

“I carried the whole brunt of the public’s ire over the infamous “one-page certification”– the prevailing system of liquidation of our operating budgets as Senators — which was neither my creation nor invention.”

“I carried the brunt of four of my colleague’s anger and displeasure over not receiving what they felt they were entitled to as their share of the savings of the Senate. No one bothered nor cared that I, too, did not receive the same amount that I had approved for the rest,” he said.

Enrile was referring to  the controversial additional  maintenance  and other operating expenses  (MOOE)  that he gave each senator  in December last year  except for four—Senators Alan Peter Cayetano, Pia Cayetano, Antonio “Sonny” Trillanes IV and Miriam Defensor-Santiago.