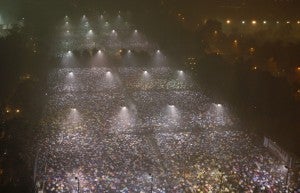 Tens of thousands of people attend a candlelight vigil under rain at Victoria Park in Hong Kong on Tuesday, June 4, 2013, to mark the 24th anniversary of the June 4th Chinese military crackdown on the pro-democracy movement in Beijing. The former mayor of Beijing who was believed to have played a prominent role in the Tiananmen crackdown died at the weekend, it was reported Tuesday. AP PHOTO/KIN CHEUNG

BEIJING—The former mayor of Beijing who was believed to have played a prominent role in the Tiananmen crackdown died at the weekend, it was reported Tuesday, 24 years after the military repression.

Chen Xitong died in Beijing on Sunday at 9:54 a.m., according to the Hong Kong China News Agency, an outlet linked to the state-run China News Service.

Chen fell from grace in one of China’s biggest political scandals and was widely seen as the official who pushed for the use of military force against the student-led protests in the heart of the capital.

He was sentenced to 16 years in jail on corruption charges in 1998, but won medical parole in 2006, according to the HKCNA report.

He died aged 84, the report said, shortly before his jail sentence would have ended had it been fully served.

His political downfall came after he was promoted to Communist Party secretary of Beijing and made a member on the all-powerful Politburo, China’s de facto ruling body.

His rise in the party was widely seen as a reward for his role in the Tiananmen episode.

Chen said he was “sorry” for the tragedy and that the deaths could have been avoided in an interview contained in a book released last year titled “Conversations with Chen Xitong.”

He also attempted to shift the blame, saying he was merely acting on orders from the top leadership.

But Zhao Ziyang, the former communist party secretary who was purged and held under house arrest following the protests after he sympathized with students, blamed Chen for the tragedy in his memoir.

Other senior figures within the Communist Party also said Chen was one of the masterminds of the crackdown.

The report of his death emerged as tens of thousands of Hong Kongers attended a candlelight vigil marking the 24th anniversary of the crackdown, as Beijing blocked commemoration attempts.

The Chinese Communist Party branded the Tiananmen protests a “counter-revolutionary rebellion.” Hundreds, perhaps thousands, of people were killed in the June 3-4 onslaught in Beijing in 1989.

Read Next
Floodwaters peak in Prague, head for Germany
EDITORS' PICK
Unemployment rate up to 6% in May
House energy committee chair Arroyo bats for cheap electricity
High-risk pregnancy: Reducing your risk is in your hands
High inflation: Your P1 is now worth only 87 centavos
UK’s Boris Johnson will resign, BBC reports
Geek out at TOYCON 2022 powered by Smart Signature
MOST READ
Suspect in grisly killing of missing woman in Bulacan arrested
Kim Atienza’s daughter flaunts bikini body in response to critics of her ‘revealing photos’
Japanese artist who created ‘Yu-Gi-Oh!’ found dead in the sea
FDA probes popular Filipino noodle brand for ‘high level of ethylene oxide’
Don't miss out on the latest news and information.