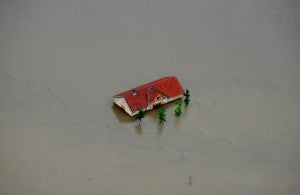 This picture made available Tuesday June 4, 2013, shows an a erial view of the swollen Vltava river and a flooded house near Stare Ouholice village near Kralupy nad Vltavou, about 35 km (21.7 miles) north of Prague, taken on Monday, June 3, 2013. Heavy rainfalls caused flooding along rivers and lakes in Germany, Austria, Switzerland and the Czech Republic. AP PHOTO/CTK, VIT SIMANEK

PRAGUE—Floodwaters that have killed at least 10 people across Europe on Tuesday morning peaked in the Czech capital Prague and were heading toward Germany, officials said.

“It’s peaking in Prague right now and by the evening the wave will get to Usti and Labem,” about 30 kilometers (20 miles) up the Elbe river from the German border, Petr Dvorak, spokesman for the Czech Hydrometeorogical Institute, told AFP.

The floods have deluged Prague’s historic center, shuttering businesses and forcing a chaotic nighttime evacuation of the city’s zoo.

The floods have killed seven people so far in the Czech Republic, police said Tuesday. Two people died in Austria and one in Switzerland. Germany has also been hit.

“The last victim (in the Czech Republic) was a lady who was walking her dog in a park on Monday evening and who died under an eroded tree that fell on her,” police spokeswoman Pavla Kopecka told AFP.

The heavy rainfall has triggered nightmarish memories of the 2002 floods that killed dozens in the region including 17 in the Czech Republic alone.

Dvorak said the waters would recede in the western part of the Czech Republic on Wednesday.

“There will be heavier rain in the east of the country and some rivers there will rise high, but the extent should be lower than here,” he added.

Merkel traveled by helicopter over the flood zone and visited three impacted areas, starting in Passau, Bavaria, where the Danube meets two other rivers and peaked late Monday at 12.9 meters (42 feet), the highest level since 1501.

The chancellor vowed the emergency cash would be disbursed in an unbureaucratic way because “what’s important now is that the aid quickly reaches the people.” The property damage in Passau alone was estimated at 20 million euros ($26 million) by the city mayor.

Some people have paddled canoes down flooded streets in Passau, where drinking water, power and phone services were cut. Elsewhere stranded residents were evacuated from their soggy homes by rescue personnel using inflatable boats.

“The damage and the loss of income is a long-term matter. And that’s why our support will not cease,” said Merkel, who faces an election in less than four months and was later photographed helping fill sandbags.

Austria mobilized more than 20,000 firefighters, police and rescue workers and 800 soldiers in areas along the Danube.

In Hungary, Prime Minister Viktor Orban declared a state of emergency and mobilized more than 20,000 emergency and military personnel ahead of the arrival of the peak of the Danube flood, expected in western areas Wednesday and in Budapest by the weekend.