FOI advocates to go straight to lawmakers for support, to rely less on Aquino 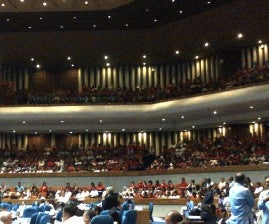 MANILA, Philippines—Stung by its disappointing experience in the 15th Congress, advocates of the freedom of information bill would refocus their strategy in the next Congress and would be less reliant on the support of President Benigno Aquino in their push for the transparency measure.

Nepomuceno Malaluan of the Right to Know, Right Now! Coalition said the group would concentrate on getting the commitment of the majority of lawmakers in Congress for the FOI bill to ensure the measure’s approval come voting time.

In the 15th Congress, the advocates had relied on the core group of lawmakers who were “FOI champions,” since they were anticipating that the President would follow through on his avowed support for the measure and get his allies to back it, said Malaluan.

But the support did not materialize, and the bill died from delays and inaction in the House of Representatives. It had been approved in the Senate.

The coalition, in an earlier statement, castigated the President for hobbling the campaign for the measure with “variably petty and serious mutating concerns” and for refusing to certify it as urgent.

In the 16th Congress, where groups are seeing a new battle for the passage of the FOI measure, the advocates will go directly to the lawmakers themselves, regardless of the President’s position on the matter, according to Malaluan.

“The strategy really is to get the commitment of the necessary votes both in the committee and in the House plenary… At the end of the day, we need to know where each and every member of Congress and Senate stands on this issue,” he said in a phone interview with the Philippine Daily Inquirer.

“We know the support of the President is key in major legislation, but if it’s not forthcoming, it doesn’t stop the campaign from going to each and every member of Congress and hoping that they act independently, assuming the President won’t support it,” he added.

He expressed hope that the Senate, now filled with the President’s allies just elected or re-elected to the 16th Congress, would remain supportive of the FOI measure. The Senate, under the helm of Juan Ponce Enrile, had always passed the bill, he noted.

Enrile is expected to bow out of the Senate presidency, to be replaced by the President’s bet Senator Franklin Drilon, after the administration Liberal Party-led coalition dominated the May senatorial elections.

FOI advocates have been preparing early for the new campaign in time for the opening of the 16th Congress next month, so that they can immediately implement strategies early in the game to garner support for the measure.

“By the time this (15th) Congress’ term ends, we will hit the ground running,” he said.

FOI supporters have been in an uphill climb to get the bill to become a law. It came close to its goal in the 14th congress, where the bill was only waiting for the ratification of the House of Representatives before being submitted to then President Gloria Macapagal-Arroyo for signature. But the House sidelined it by declaring a lack of quorum.

In the 15th congress, the measure did not go that far, and was not even put to a second reading vote in the House plenary.

The FOI bill has been touted as a tool for transparency in government to battle corruption. It would put in force the constitutionally guaranteed right to information, and aims to empower the people by giving them better access to government data and transactions.