Philippines is fastest growing Asian country for first quarter of 2013

(We are reposting this report to correct data on the mining and quarrying industry in the first quarter of 2013. The earlier version reported that the industry grew by 17 percent. The truth is it actually contracted by 17 percent. )

MANILA, Philippines –- The Philippines has the fastest growing economy among Asian countries for the first quarter of 2013, the National Statistical Coordination Board (NSCB) announced Thursday.

NSCB attributed the 7.8 percent increase in the GDP of the country to the strong performance of the manufacturing and construction sectors, as well as the increase in government and consumer spending.

Officials said that the quarterly growth rate was the highest since reformist President Benigno Aquino III took office in 2010 on a promise to fight corruption and cut poverty. Aquino’s allies won majorities in both houses of Congress in elections early this month, making it possible for Aquino to push through with his legislative agenda in the remaining three years in power.

The Philippines has bucked a regional trend of slowing growth amid recession in Europe and a slow recovery in the United States. It expanded faster than Asian powerhouse China, where the economy unexpectedly slowed to 7.7 percent growth in the first quarter.
The industry sector, composed of mining, manufacturing, and construction, grew by 10.9 percent, higher than the recorded 5.3 and 8.9 percent during the first and last quarter of 2012.

The Mining and Quarrying industry contracted by 17 percent in Q1 of 2013, compared to 1.7 and 2.8 percent increase in the first and last quarter of the previous year.

Manufacturing industry grew by 9.7 percent this year, higher that the 6 and 5.5 percent in the first and last quarter of 2012.

Construction industry, meanwhile, further increased to 32.5 percent compared to 29.9 percent in the fourth quarter of 2012.

The services and agriculture sectors also contributed to the growth with 7 percent and 3.3 percent, respectively.

Balisacan said the Philippines hopes to achieve a target of 7 percent to 8 percent annual growth by 2016.

Despite the impressive growth figures, the Philippines faces many challenges. Among them, the global slowdown, excessive capital inflows and natural disasters, an annual occurrence in the Southeast Asian country where poor infrastructure and rice fields suffer damage from typhoons and floods. 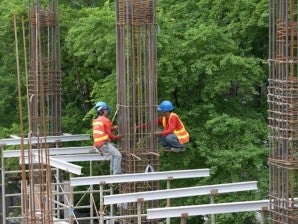 “Due to the attractive investment opportunities, we are also at risk of receiving too much capital inflows as advanced economies implement quantitative easing. The challenge is to channel these inflows into productive investments,” he said.

Increased consumer and government spending was accompanied by investment in construction, the National Statistical Coordination Board said.

Domestic consumption remained the main driver of growth, fueled by remittances from about 10 million overseas Filipino workers. Last year, they sent back $24 billion, which accounts for 10 percent of the country’s economic output. It makes the Philippines the third largest recipient of remittances in the world, after India and China and on par with Mexico.

There has been little progress in job creation. The Asian Development Bank says that nearly half of those working within the country are classified as vulnerable — unpaid family workers and the self-employed, mostly in the informal sector. Economists have urged the government to diversify the economy by revamping the educational system and providing employment opportunities in manufacturing.

The proliferation of call centers has made outsourcing one of the fastest growing industries with revenue of $11 billion in 2011. But for the large pool of unskilled labor, those jobs are out of reach. Poverty rates remain high, with about a third of the population living on $2 a day.

Balisacan said that the government understood that for growth to be inclusive, the poor must be linked to the growth industries.

“The faster this can be done, the better it will be for the greater number of our people,” he said. With reports from Associated Press, DZIQ Radyo Inquirer 990AM