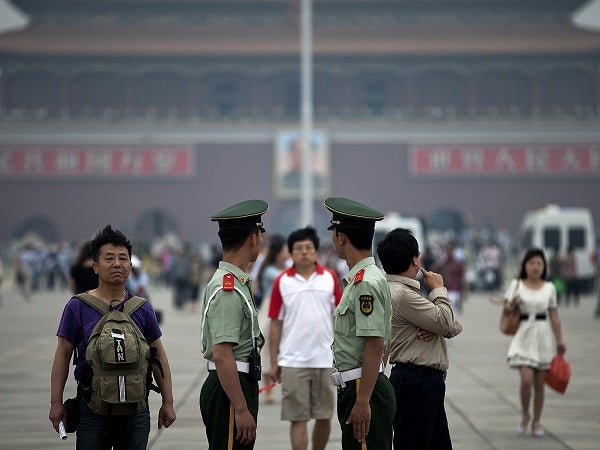 Chinese paramilitary policemen monitor visitors as they stand guard in Tiananmen Square on the 24th anniversary of the deadly 1989 crackdown on pro-democracy protestors in Beijing Tuesday, June 4, 2013. AP/Andy Wong

BEIJING – Chinese police blocked the gate of a cemetery housing victims of the Tiananmen crackdown on its 24th anniversary Tuesday, part of a sweeping annual effort to bar commemorations of the event.

Authorities launch a major push every June 4 to prevent discussion of the violently crushed 1989 pro-democracy protests, China’s darkest human rights stain in recent decades, in which at least hundreds of people died.

More than a dozen security officials deployed outside the stone gate at the Wanan graveyard near the hills of western Beijing, which members of the Tiananmen Mothers, a victims’ relatives group, visit each year.

In a narrow street close to Beijing’s Forbidden City, security personnel patrolled outside the former house of Zhao Ziyang, the former communist party secretary who was purged and held under house arrest following the protests.

Several police vehicles were positioned on Tiananmen Square itself, a vast concrete plaza in the center of the capital, where huge video screens celebrated “Green Beijing” with images of a spinning wind turbine.

Hundreds of mostly Chinese tourists strolled, posing with national flags and snapping pictures on smartphones. Some had their identification cards checked by police.

The uniformed police numbers did not seem to be higher than usual, said a snack vendor who asked not to be named. But he added: “Most police are plain clothes, you don’t know when they might be listening.”

China’s government has never provided an official toll for the repression, which was condemned throughout the world and led to the temporary isolation of Beijing on the international stage.

Unofficial estimates of the numbers killed range from around 200 to more than 3,000. The Tiananmen Mothers said in an open letter last week they believed the higher figure was accurate.

Authorities have detained or enhanced surveillance of 10 prominent dissidents, according to the Hong Kong-based advocacy group China Human Rights Defenders.

Online searches for a wide range of keywords on Sina Weibo, China’s version of Twitter, were blocked, from “Tiananmen” to “candle”, which was used to encourage digital vigils.

Activists turned instead to overseas websites to commemorate the event and criticize authorities.

“The dispute in this country is basically stuck on whether to light a candle or to extinguish it,” dissident artist Ai Weiwei posted on Twitter.

Rights lawyer Liu Xiaoyuan said on Twitter that he had been blocked from Sina Weibo for seven days for sharing “sensitive information” — urging others to honor victims by posting an image of a lit candle.

A mocked-up picture was circulating online of the 1989 “Tank Man” photograph of a civilian staring down a long row of tanks headed toward Tiananmen Square — with the military vehicles replaced by plastic ducks.

The image could not be found on domestic websites within the “Great Firewall of China”, as the country’s system of Internet controls is known.

The high-profile dissident Hu Jia wrote on Twitter that the broad crackdown on discussion of Tiananmen demonstrated the government’s weakness.

The event underscored the ruling Communist Party’s “illegal nature”, he wrote. “The unprecedentedly high pressure for the 24th anniversary of June 4 actually reveals the authorities’ fear.”

Read Next
Cebu Pacific given ultimatum to remove disabled plane
EDITORS' PICK
Unemployment rate up to 6% in May
House energy committee chair Arroyo bats for cheap electricity
High-risk pregnancy: Reducing your risk is in your hands
High inflation: Your P1 is now worth only 87 centavos
UK’s Boris Johnson will resign, BBC reports
Geek out at TOYCON 2022 powered by Smart Signature
MOST READ
Kim Atienza’s daughter flaunts bikini body in response to critics of her ‘revealing photos’
Judy Ann Santos takes break from shooting cooking videos due to price increases: ‘Parang unfair’
FDA probes popular Filipino noodle brand for ‘high level of ethylene oxide’
Japanese artist who created ‘Yu-Gi-Oh!’ found dead in the sea
Don't miss out on the latest news and information.