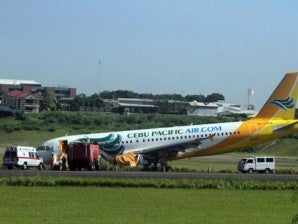 A Cebu Pacific Airbus A320 plane sits on the grassy part of the landing strip at the international airport in Davao after it overshot the runway during a rainstorm Sunday night. AFP PHOTO / Karlos Manlupig

MANILA, Philippines—The Civil Aviation Authority of the Philippines has given Cebu Pacific Air, the country’s biggest budget airline, until 3 p.m. Tuesday to remove a disabled A-320 plane that is obstructing the runway at the Davao International Airport or the government would carry out the removal operation itself.

At a press conference, CAAP Deputy Director General John Andrews reiterated his earlier statement pointing to human error as a possible cause of the accident, given evidence that the pilot had failed to correct his heading while landing on the airport Sunday night. The plane apparently missed the runway.

“Evidence does not lie. We have now evidence that points to possible human factor. In other words, it may be pilot error,” said Andrews.

He said he was confident that information from the flight data recorder would support his initial theory.

Andrews also questioned why Cebu Pacific failed to order an immediate evacuation—within three minutes as per emergency procedure—despite the heavy impact of the troubled landing, which left considerable damage on the aircraft.

He said the plane may “no longer be salvageable” considering the extent of damage. Andrews said both of the plane’s engines were severely damaged and the nose gear had collapsed.

CAAP officials also considered the possibility of suspending all Cebu Pacific operations but said the impact on the travelling public and the economy would have to be considered.

Read Next
Motorcycle-riding ‘criminal’ slain by cops in Laguna
EDITORS' PICK
‘Revolting’: 29,000 teachers left out after PS-DBM bought pricey, outdated laptops
House energy committee chair Arroyo bats for cheap electricity
Dengue cases in PH continue to swell: 92,343 as of July 23
TNT brings Sarah G and Mimiyuuuh together for epic collab
SMDC all set for growth, prepared to face market resurgence
Imee Marcos tests positive for COVID-19
MOST READ
Raffy Tulfo blasts ‘killjoy’ critics of Angara’s birthday party: It’s for charity
Bongbong Marcos to PNP: Use of force must be reasonable, justifiable and only when necessary
Homeowners of BF Homes in Parañaque protest opening of 5 gates to public
‘Revolting’: 29,000 teachers left out after PS-DBM bought pricey, outdated laptops
Don't miss out on the latest news and information.