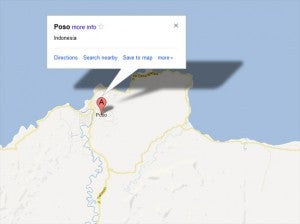 JAKARTA — Police say an unidentified motorcycle driver has carried out an apparent suicide bombing at a police headquarters in central Indonesia.

Police chief Lt. Col. Sisnadi said the man was trying to enter the station Monday morning in the central Sulawesi town of Poso when his bomb went off, killing him instantly. A nearby construction worker was hurt but no police were killed.

Sisnadi, who uses a single name, said the bomb went off near the station’s mosque.

Indonesia, the world’s most populous Muslim nation, has seen a series of terrorist attacks since the 2002 Bali bombings that killed 202 people, mostly foreign tourists.