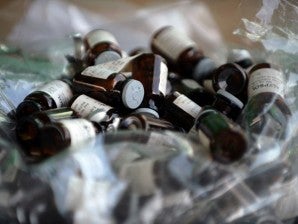 HONG KONG— Hidden away from the prying eyes of crowded Hong Kong, in school toilets, karaoke bars and public parks, young people are snorting a powerful and addictive drug— ketamine.

Cheap and abundant, with a supply flooding across the border from the mainland, abuse reached such levels in the late 2000s that the city was dubbed the ketamine capital of the world.

But in recent years Hong Kong has fought back, campaigning against what is a psychologically addictive drug that can cause irreversible health problems and take longer to treat than heroin.

On an isolated, jungled island, far from the city’s gleaming skyline, a group of young men are working bare-chested under the sun, painting the outside wall of a building.

This is the Shek Kwu Chau residential treatment centre, and these are some of its “clients”, ketamine abusers who come from mostly middle-class homes, with an average age of around 25.

Kin, now 27, arrived here after a 10-year habit that saw him go from user to dealer. He told AFP he only tried the drug in the first place to show his friend he didn’t need it.

“I didn’t realize it had such an attraction. I felt so weightless and free after taking it. I was in love with this feeling and got addicted to it,” he said.

Ketamine, which is closely related to PCP or “angel dust”, is used as an anaesthetic on both humans and animals.

The drug, often synthesized in clandestine laboratories in mainland China, can render users immobile. But it also makes them feel relaxed and floaty, and can produce a hallucinatory out-of-body experience known as the “K-hole”.

“Yes, there’s not a physical addiction, but they are very much psychologically addicted,” he said. “They want to taste the excitement, it’s always on their mind.”

The government-funded center is run by SARDA (Society for the Aid and Rehabilitation of Drug Abusers), and is both free and voluntary.

It mostly caters to heroin addicts but in 2010 it opened up to ketamine abusers after a sharp rise in cases. The young men live together as a “family” in simple stone houses overlooking the sea, 16 narrow bunks in a room.

In 2009 ketamine abuse peaked at 5,280 reported users, according to statistics from Hong Kong’s central registry of drug abuse. More than half of those were under 21, an age group in which among reported drug users, 84 percent took ketamine.

By last year the number had fallen to 3,192, though drug workers warn its use is easily hidden, and often takes a long time to surface.

“Our focus has been to encourage people to seek help early rather than hiding. The first priority will be to assist rather than to catch or prosecute people for taking drugs,” she said.

The success of this strategy could point the way for other countries with ketamine problems, like Malaysia, Thailand and Vietnam, though it would “depend on the local circumstances”, Hui said.

Criminologist Dr Alfred Mak of Hong Kong University said one reason locals were drawn to ketamine was because it was so cheap, costing around HK$100 ($13) for a small bag that could be shared amongst friends — a fraction of the price of cocaine.

But he also said the drug was “particularly suited” to the environment.

“We live in a very narrow space and we have a lot of interference, even from our neighbours, but people can take this drug in a hidden and secluded place,” he said.

Ah-Wai started snorting ketamine in the top floor toilets of his school when he was just 16.

“You can take it any time, any place, and people won’t know what you are doing,” he told AFP.

He found the buzz of confidence hard to resist, but over time he was also struggling to concentrate, found it hard to explain his bleary appearance, fought with classmates and was eventually expelled.

He also became unable to hold his bladder for more than 15 minutes, afraid to use the bus in case he wet himself. One day he fell unconscious in the street, waking up three days later in hospital.

Every week she sees patients whose bladders have been shrivelled because of ketamine, with some forced to wear incontinence pants.

“Currently it’s still not treatable. The only thing that works is to stop taking the ketamine,” she said, noting that while some people will regain full capacity other heavy users will not.

Hong Kong security officials say ketamine is smuggled from the mainland in small quantities, likening the process to “ants moving home”. It can be carried in liquid form hidden, for example, in a contact lens bottle.

Last year police and customs seized 724 kilogrammes of the drug, recording 1,677 ketamine-related cases, a drop from 3,679 cases in 2009. Both seizures and cases far outnumbered those for heroin, cocaine and methamphetamine.

Ah-Wai, now 22, said he had lost all confidence before arriving at Shek Kwu Chau, but was now managing to rebuild his life. He is living in a half-way house, working with his father and hoping to become an electrician.

“I would tell any teenagers who wanted to try ketamine about my own experience,” he said. “I would tell them how much I lost in the past two years, and how much of a waste it was.”