Some US police dogs not smelling marijuana anymore 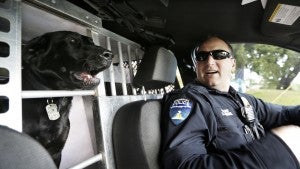 In this photo taken Thursday, May 30, 2013, drug-sniffing police dog Dusty sticks his head into the front seat as handler Officer Duke Roessel patrols in Bremerton, Wash. The newest drug-sniffing dog on the police force in Bremerton, near Seattle, is one of a few police dogs in Washington state that are not trained to point out pot during searches. Other police departments are considering or in the midst of re-training their dogs to ignore pot as well, part of the new reality in a state where voters last fall legalized marijuana use. AP photo

BREMERTON, Washington— The newest drug-sniffing dog on the police force in one U.S. city is not trained to point out the presence of marijuana. Other police departments in the area are re-training their dogs to ignore pot as well — part of the new reality after voters in Washington state legalized marijuana use last year.

“We wanted to train our dog on what was truly illegal substances, that would be heroin, methamphetamine and cocaine,” said Officer Duke Roessel, who handles a 19-month-old black Labrador named Dusty in the city of Bremerton, near Seattle.

Washington and Colorado are the first states to legalize marijuana for recreational use, and the rest of the country is watching — while the federal government continues to see marijuana use as illegal.

Police departments in Seattle and other cities, as well as the Washington State Patrol, have either put the dogs through pot desensitization training or plan not to train them for marijuana detection.

The new law decriminalized possession of up to an ounce (28 gram) of the drug for individuals over 21 years old. It also barred the distribution and growth of marijuana outside the state-approved system.

Traditionally, police dogs are trained to alert on the smell of marijuana, heroin, crack cocaine, methamphetamine and cocaine. They can’t tell which one it is or how much of each there is.

But some police departments aren’t making any changes.

Dog trainer Fred Helfers of the Pacific Northwest Detection Dog Association is helping departments who want to go through the “extinction” training, which he said is a common method to change what substances dogs alert to. It takes about an initial 30 days plus everyday reinforcements to modify the dog’s behavior.