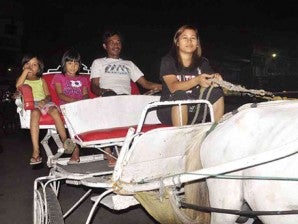 DAGUPAN CITY—Before sundown, 15-year-old Angeline Nuncio has already slung her carriage to her horse, slipped into her denim pants and flip-flops and geared up for another night of work and fun.

By the time the bright street lights of Dagupan are on, she and her calesa are at the street corner at the side of the city plaza, waiting, along with other kutsero (horse-drawn carriage drivers), for passengers who want to tour the city at night.

But Nuncio, a third year high school student at the Mangaldan National High School, easily attracts the attention of passengers. She’s not only the youngest kutsero here but the only girl as well.

“Many passengers can’t believe that I can drive a calesa,” Nuncio says.

But after the 20-minute tour around the city’s main streets filled with jeepneys and cars, Nuncio’s passengers become convinced she could handle the reins well.

“My father taught me how to do this when I was in Grade 5,” says Nuncio.

At that time, her father, Salvador, 52, was plying the city’s 2.5-km downtown loop. He was among the first kutsero tapped by the city government when it brought back the horse-drawn carriages to city streets during Dagupan’s fiesta in 2001.

“She was so persistent in holding the reins. So every time we went home to [Barangay (village)] Salisay (about 5 km away) after a night’s work, I allowed her to drive our calesa,” says Salvador, a former fish vendor who made good as a kutsero. He now owns five horse-drawn carriages.

On a good night, Nuncio would earn about P1,000. “But there are nights when there are no passengers at all, especially during rainy days,” she says.

During slow days, she says, she would be invited with her carriage to weddings or other occasions that require a horse-drawn carriage. The money she earned was spent on her and her five sibling’s school and other needs.