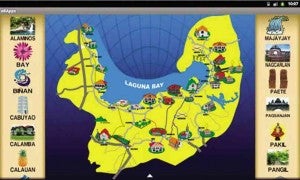 THE ERIZAL app for the Laguna province can be downloaded at the Google Play store via this link: http://bit.ly/14pABn0.
PHOTO COURTESY OF NEIL NOCON

SAN PEDRO, Laguna—No, it has nothing to do with the former president.  The “eRApps,” or the eRizal Apps, is a mobile application about Laguna province, its history and the popular tourist destinations.

On Google Play, a search for “Laguna App” or eRApps will show a picture of national hero Jose Rizal, who was born in Calamba City in the province in 1861.

The provincial government of Laguna announced the release of the mobile app in a soft launch in March but it has been made available for free download to any smartphone or computer tablet since April 12.

“The Laguna App… helps tourists and students get acquainted with Laguna, [which] has been described in a song as a place blessed with nature’s gifts,” the app’s description read.

The app’s homepage shows a map of the imperfect horseshoe-shaped province, bordered on both sides by “clickable” icons that represent a town or a city in Laguna.

For instance, an image of kesong puti (white cheese) popularly produced in Sta. Cruz represents the town while an image of the Oblation statue is for Los Baños, as it is the location of the University of the Philippines (UP).

By clicking the icons, the user can access the town’s history, information about the municipality and a gallery of photos and descriptions of the popular sites and products.

There is also a “how to get there” option, which links the user to Google Maps and guides him or her on the best routes to reach the place.

“When you go to Hong Kong or Singapore, they have these brochures [for tourists] but unfortunately, we don’t have much of those here in Laguna,” said industrial engineer Ari Halos, who was part of the five-man team commissioned by the provincial government for eRApps.

“This [app] will be like an online guide and at the same, it is in keeping with the digital trend,” he said.

Laguna outgoing Board Member Neil Nocon, whose committee on education, tourism, history, arts and culture initiated the project, said the historical content was collated by a group of UP professors and historians for an upcoming coffee table book, another project of the provincial government.

Aside from serving as a marketing tool for Laguna, which recorded a 4.8 million annual tourist arrival as of 2012, Nocon said the app is also “educational,” as it is also content of the eRizal tablets, hence the name eRApps.

“But really, that’s just a coincidence,” Nocon said, referring to former president Joseph Estrada’s moniker, “Erap,” and who also happens to be an uncle of Laguna Gov. Jeorge “ER” Ejercito.

The Department of Education-Laguna is training public school teachers on the use of the app and the eRizal tablets from May 26-28 in time for the school opening on June 3.

The provincial government distributed 500 eRizal tablets to 10 schools to be used for the first time by incoming Grade 7 students in Laguna this school year.

“The competition now is no longer in college or postdoc (doctorate levels) but as young as in high school,” said Nocon, whose project was inspired by Robert Nay, a 14-year-old from Utah who created a popular computer game application.

“Young people also need to learn about their local history,” he added.

According to Halos, it took them a month to create

eRApps because of its content but a simple app can be made in two to three days. He said another goal of the project is to train students on developing computer apps in schools.

As a guide to tourists, eRApps also includes a complete phone directory of Laguna police stations. Halos said they were working on making the hotlines clickable for the user to easily dial the authorities in case of an emergency on the road and on upgrading its content regularly.