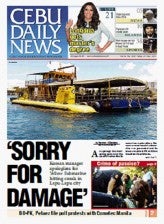 An apology for damaging corals in the sea off Mactan finally came two weeks after a Korean-owned tourist submarine was grounded and its losses reached P8 million based on its estimates.

“We would like to apologize for the trouble that the Yellow Submarine has caused,” said Jun Kim, general manager, in a May 9 letter to Lapu-Lapu City Mayor Paz Radaza.

He said the company “preventively suspended the captains” of the submarine, after it was videotaped by a Japanese diver who saw the vessel hit a wall of corals in Kontiki Drop last month.

“We are taking full responsibility and are willing to attend to the damages that may be established to have been caused by the submarine to the corals,” wrote Kim.

After the video was posted on YouTube and went viral, local divers and the community raised an uproar prompting the Lapu-Lapu city mayor to suspend the firm’s business permit.

Company officials at first flatly denied the incident took place. In an April 30 press conference, they said the video was misleading, and that “clouds of dust” were mistaken for proof of a “crash”.

Mayor Radaza said she is still weighing whether to lift the city’s cease-and-desist order against the company based in the Imperial Palace Water Park Resort.

Radaza said she is waiting for initial results of an undersea inspection of the site by the Coastal Conservation and Education Foundation (CCEF), which is also checking the path of the submarine, a new enterprise that started last December.

The foundation will assess the site and make an inventory to guide a possible estimate of damage.

“I am not against the operation of the tourist submarine because it will bring revenue for the city, provided it won’t damage the natural marine habitat in the area,” Radaza told reporters.

She said the management should also secure necessary permits from the Marina, Coast Guard, Department of Environment and Natural Resources, and Bureau of Fisheries and Aquatic Resources, which her office will based her decision on.

Kim, in his letter, said the Cebu Yellow Submarine company is “willing to take concrete steps that will help build coral reefs by creating artificial reefs or by creating coral nurseries in coordination with the government and private sector.

He also said they would hire an impartial agency to conduct an investigation:“We will be doing this independent investigation to be fair to any party.”

Kim assured the mayor the submarine will keep the “necessary or required distance from the corals”.

He stressed that tourist submarines around the world were “totally safe” with no reported untoward incidents since its first operation in 1985.

Since they stopped operation in April 26, following a notice of violation issued by the Lapu-Lapu city administrator, the tour company said it had incurred losses.

Kim said they had an average of five trips per day with 48 passengers on board. Each guest pays P1,200 for a 45-minute underwater tour.

Kim said they suffered P8 million in losses since April 26 and that the amount would reach over P10 million if the issue isn’t settled at the end of the month.

The yellow submarine is the first of its kind underwater tourism in the country.

He happened to be diving that day 20 meters below sea level in Kontiki Drop, one of the most popular dive spots in Lapu-Lapu city.

The site, which is home to many species of fish and corals, is protected by local and foreign divers who practice self-regulation and mark the area with buoys to prevent boats from dropping anchors that could destroy corals below.

Toyoda said he just wanted to share a personal video with friends, and was surprised by the furor it caused.

He said he was willing to testify about what he saw underwater.

“The video is everything,” he told reporters earlier.

“They just have to say say sorry and let them do their training again. Never destroy nature.”